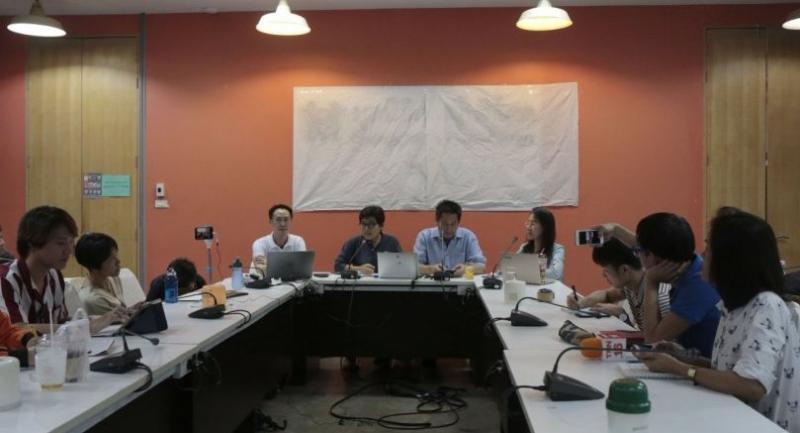 They said, in the process the department had potentially sabotaged Thai medical research and development based on cannabis.

They will be hit with lawsuits if they refuse the demands, FTA Watch warned. Achara Eksaengsri, an expert on medicine patents and drug access, noted that legalisation of medical cannabis is now in process and new medicines are being developed from cannabis extracts by the Government Pharmaceutical Organisation (GPO) and Rangsit University. But the progress of these efforts were now threatened by indefinite delay because of the cannabinoid medicine patent issue.

The problem is that the pharmaceutical companies are now using a legal loophole in the Thai intellectual property protection law as a tactic to monopolise the medicine marketplace, she said, as the law grants protection for patent applications from the first day that it enters the consideration process.

“Even though other medicine developers can still work on their cannabinoid drug research during the period of consideration, these pharmaceutical companies will file a notice to their opponents about their intellectual property claims. This will demoralise researchers, as their hard work could be wasted because of the possibility of intellectual property violation in the future,” Achara said.

“Medical research and development is expensive and no one wants to invest in a wasteful project, so keeping these ineligible patent applications in the system will severely harm the country’s cannabinoid medical research effort.”

She noted that the consideration process would normally take up to five years, and sometimes extend to 10 years, allowing the big pharmaceutical companies to reap a large benefit if they can halt research by potential competitors for such a long time.

BioThai Foundation director Withoon Lienchamroon said the registration of cannabinoid medicine patents in Thailand by transnational pharmaceutical companies was a clear violation of the intellectual property law. Yet the Intellectual Property Department had not been alert to the need to perform its obligations, despite its power to immediately reject unqualified patent applications, he said.

“Most of the cannabinoid drug patent applications that we have found do not qualify to register for intellectual property protection in the first place, because they |are either not a new invention or are claiming intellectual property rights over natural parts of living organisms, or both,” Withoon said.

“The law states that the Intellectual Property Department director-general has the power to dismiss ineligible applications right away when they receive the application, but the department chose to do nothing.”

He accused the department of also failing to be transparent. Not only did the department fail to improve its patent-search system to make it easily accessible to the public, but it also kept secret some of the details of the patent applications. The lack of transparency makes it very difficult for the public to look into the details of these patent applications, said Withoon.

“If the department fails to comply with our demands, we are considering offering legal advice and help to those who are disadvantaged by the department’s inaction, such as the GPO and Rangsit University, and sue the department in court,” Withoon said.

Dean Panthep Puapongpan of the Rangsit Institute of Integrative Medicine and Anti-Ageing said the patent issue had already caused the university problems in its effort to develop medicines from cannabis.

“We are strongly opposed to patent registration of medical cannabis, because Thai people have learnt to use cannabis in many traditional Thai medicines for hundreds of years,” Panthep said. “Everyone should have the right to equal access to cannabis for medical treatment.

“Even though Rangsit University does not yet have a plan to sue the Intellectual Property Department, we are open to this option.”