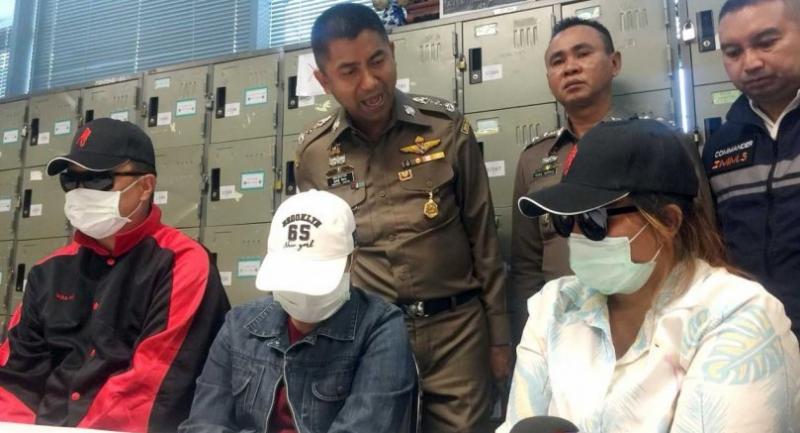 The suspects – identified as Krongkaew Khamtha, 32; Chotika Kerdkilian, 32; and Korean national Kisik Eum, 49 – were arrested on Friday and have reportedly confessed to having lured at least 30 Thais to work illegally in South Korea over the past five months, Surachate said. They were charged with illegally supplying Thai workers to work in another country without permission (punishable with three to 10 years in jail and fines of between Bt60,000 and Bt200,000), public fraud and violating the Computer Crimes Act (providing false information to the public).

Surachate said Krongkaew’s job was to post vacancies on social media, collect airfare from prospective employees and get them “trained” in Pattaya, after which the Korean man would test the prospects to see if they could work in South Korea. Once the quota of wanted workers was filled, Chotika would issue plain tickets and have them board their flight at Suvaranabhumi. On the other side, the workers would be collected by South Korean accomplices and put to work. The workers’ initial priority was to cover the Bt55,000 recruitment fees.

In a separate case, Surachate also announced the arrest of Theerapat Sothong, 23, who was nabbed on Saturday as per an arrest warrant issued by Chon Buri Court for allegedly duping three individuals out of nearly Bt200,000 by offering jobs in South Korea via posts on Facebook.

One of the victims was a woman, who was lured to meet the man at a resort on November 19 to pay Bt10,000 for the job application. However, the suspect allegedly raped the woman and locked her up in a toilet before fleeing with the money.

Jobs in South Korea have long-been popular among Thais, prompting some profit-seekers to open online recruiting agencies. Apart from this, some community pages also offer information about jobs available in South Korea – where the minimum wage is a lot higher than in Thailand – and even tips on how to avoid arrest.

Many Thais have been heading to South Korea with the hope of getting jobs and becoming undocumented workers, known as phee noi or “little ghosts”.

Some 188,000 Thais are believed to be working in South Korea, but only 66,011 hold proper work-permits. The rest have either overstayed their tourist visa or are working illegally, Labour Minister Pol General Adul Sangsingkeo said. In early October, he called on illegal Thai workers to come forward voluntarily and return by March 31 in order to avoid being blacklisted by South Korean authorities.