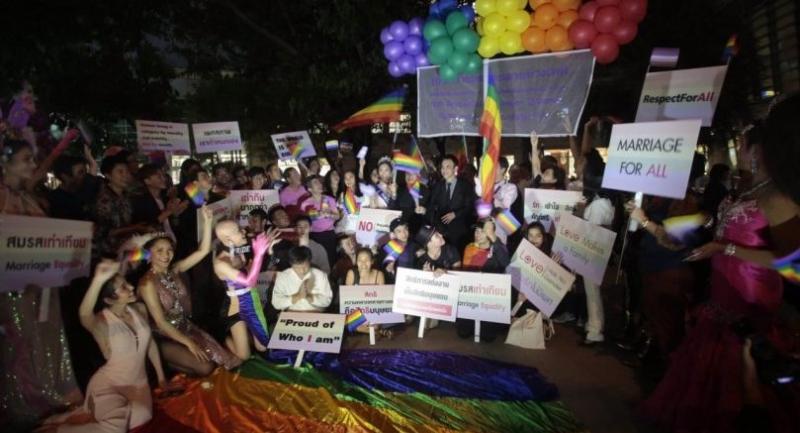 PARTY forrights An LGBTQI group yesterday marks the 10th anniversary of LGBT Day at Chamchuri Square in the capital to promote gender rights and equality in Thailand. Photo Prasert Thepsri

BOTH THE Civil Code’s marriage law and the new Life Partnership Bill are in violation of the Constitution’s gender-equality principle, gender-diversity campaigners asserted as they pressed for full marriage equality rather than a two-tier approach that continues to stigmatise minorities.

The Life Partnership Bill will only be acceptable if this bill adheres to the marriage principle and secures rights and benefits for LGBTQI (lesbian, gay, bisexual, trans, queer and intersex) married couples that are the same as for straight couples, Kittinan Thammatath, director of Rainbow Sky Association of Thailand, insisted.

Kittinan and others yesterday addressed a seminar at Chulalongkorn University, where they discussed people’s rights to marriage equality and to creating a gender-diverse family.

“Since every Thai citizen is protected from discrimination and gender equality is protected by the current Constitution, it is our constitutional right to have marriage equality and be able to create a family of our own, regardless of gender. Every legally married couple should receive similar rights and benefits from the authorities,” Kittinan said.

The opposite is now the case, he said, as many laws, and especially the current version of the Life Partnership Bill, diminished the rights of LGBTQI couples. These laws do not provide the same level of rights protection and legal benefits to LGBTQI couples, as are enjoyed by heterosexual married couples.

“As of now, it is still against the Civil Code for a same-sex couple to legally marry and register their marriage certification,” he noted. “This is because legal marriage under the current law is restricted to straight couples only.”

The current version of the Life Partnership Bill, now undergoing revision at the instruction of the Cabinet, has failed to meet its original intent to promote equal rights for every population group to marry, he said. “Many fundamental rights and benefits of being married, such as the right to have their own child by surrogacy or adoption, right to get social welfare and benefits from the marriage, or even the right to make medical decisions for the spouse and manage the deceased partner’s body are not given to same-sex couples in this law,” Kittinan said.

Therefore, he said, lawmakers still have work to do to provide rights and benefits to LGBTQI couples that are the same as those given to straight married couples under the Life Partnership Bill.

If true equality is not ensured, LGBTQI rights groups will consider pursuing the option of a Civil Code amendment that allow two people to marry regardless of their gender.

The groups will also consider filing a lawsuit at the Constitutional Court to testify that the current Civil Code marriage law violates the gender equality principle, which is protected by the Constitution. Thongrob Rodsawat, prominent gender diversity and LGBTQI rights campaigner, backed Kittinan’s position. He insisted that the proposed Life Partnership Bill not only restricts the rights of LGBTQI people, but also the rights of heterosexual couples. He said the bill is trying to establish civil partnerships as an alternative to the civil union concept instead of marriages.

“Civil marriage is another widely accepted type of life partnership in the West, as it requires a less strong partnership and less complicated legal bond compared to marriage. This choice of union is preferred by some couples who do not want to engage in the strong and complicated bond of marriage,” he said.

He emphasised that what LGBTIQ rights activists are campaigning for is not same-sex marriage itself, but for marriage equality in which everyone has recognition of their right to build their own type of family.

He added that the real problems behind the Life Partnership Bill is the lack of understanding for the issues of gender diversity and gender equality, and the strong conservative stance of the majority of Thai lawmakers. There’s a need for some people to update their mindset and keep up with a constantly shifting society.

Nongporn Roongpetchwong, a representative from the government’s Rights and Liberties Protection Department, updated the seminar on the progress of the Life Partnership Bill. It remained in the initial legislative process after the Cabinet recently asked her department to revise the bill to ensure it suited Thailand’s society and culture.

Nongporn insisted that the department, while working on the revisions, is taking into account all the comments gathered from the public hearings, while also ensuring the key principles in the bill are similar to those of the Civil Code marriage law.