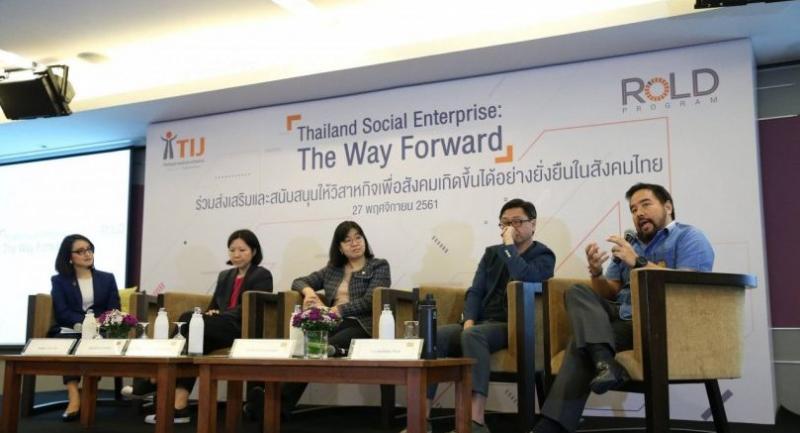 STAKEHOLDERS should take part in shaping the future of social enterprise in Thailand and boost sustainable development, experts told a seminar recently.

Social enterprise (SE) has emerged as a solution for a more sustainable economic growth in response to widespread social, economic and environmental problems caused by capitalism.

Thailand has always endorsed the concept of SE, and with support from civil society and private sector, policies and relevant laws have been developed since 2010 when the Thai Social Enterprise Office (TSEO) was set up to promote social enterprises and develop a network.

The Cabinet approved a new draft bill in July to encourage businesses to conduct more activities for the benefit of society, which will help develop communities and ease environmental problems.

At a recent seminar titled “Thai Social Enterprise: The Way Forward”, Kittipong Kittayarak, executive director of the Thailand Institute of Justice, said a law is good when it is accessible to all equally and can create an ecosystem where people are empowered to bring innovation and ease inequality.

The key to success starts from providing entrepreneurs with enough knowledge to build their own business model and giving them access to funding and tax advantages, he added. However, he said, the driving motive for social enterprises is far more complicated than just setting up a startup that focuses on profits. He noted that building an ecosystem that supports SE is also important.

“The law alone cannot govern every part of the ecosystem. Cooperation from all sectors, namely incubators, education sector, financial institutions, entrepreneurs’ associations and public sector are key for the successful implementation and development of SE,” Kittipong said in an opening speech at the seminar. The seminar was organised by the Thailand Institute of Justice, which supports and promotes SE as a model to achieve sustainable development, in partnership with Rule of Law and Development Programme Fellows.

“SE can be seen as a new tool to change the society’s perspective and encourage people to ‘do well by doing good’,” the director said.

ML Dispanadda Diskul, member of the TSEO board, said Thai entrepreneurs had the passion to work on social enterprises, but lacked the skill, so they become small fish in big ponds with a slim chance to grow.

He suggested that the private sector should help pass on the knowledge, create a suitable environment and sharpen their SE business model. “Big SEs should help small SEs. For instance, big enterprises can provide trading or marketing channels to their smaller counterparts by taking their goods to sell in the market,” Dispanadda said.

So, she said, the most important thing is evaluating the enterprise’s social impact as well as the pressure it can have on the public. “But the enterprises should be regulated by market forces rather than depending on one person to prove whether or not it achieves its goal,” she said.

Sunit Shrestha, director of ChangeFusion, a Bangkok-based organisation that helps social entrepreneurs in creative and sustainable change, suggested some strategies to strengthen SEs:

l Scaling up or elevating potential SEs; and

l Getting the private sector to partner with existing SEs in local communities or developing into SEs.

Jaranporn Lertsahakul, managing director of Green Style, a social enterprise on environment promotion, said in order to make SEs sustainable, state agencies or the private sector can help by buying goods or services from SEs or giving tax incentives to consumers who buy products from SEs. These incentives are useful because the production cost for SEs is higher.

A public hearing on the Social Enterprise Promotion draft bill was held recently and has now reached the final stage before being handed over to the National Legislative Assembly for consideration.

Nattapong Jaruwannapong, TSEO director, said the key aims of the draft bill were to help social enterprise entrepreneurs survive, encourage the private sector to shift their corporate social responsibility approach towards long-term development and to reform the public-service system.

“The answer of the bill is to turn [companies’] profits into public interest,” said Nattapong, who played a key role in pushing for the SE promotion bill.

The new bill requires social enterprises to reinvest at least 70 per cent of their profits for the benefit of the underprivileged, the disabled, farmers or other schemes prescribed by the finance minister. Registered social enterprises will also be able to seek promotional privileges and tax incentives for their investment.

Under the new law, an office of the National Social Enterprise Promotion and a committee will be formed to set related policies and strategies, and also work out a master plan to promote social enterprises.

A social-enterprise promotion fund will also be set up, through which entrepreneurs can seek loans. The main income of the fund will come from donations from the private sector and the general public.

In Thailand, there are around 300 social enterprises and the government expects another 10,000 to be created in the next decade.

The country’s modern social-enterprise movement can be traced back to 1974, when the Cabbages and Condoms restaurant was set up. The successful restaurant has been using its proceeds to fund sexual-health education and provision programme.

Another pioneer is Doi Tung, a project launched in 1989 by the Mae Fah Luang Founda-tion under Royal Patronage to create jobs and community development for hilltribes in the Doi Tung area of northern Thailand. At the time, Doi Tung, which falls within the “Golden Triangle”, was ravaged by abject poverty, opium cultivation and addiction, as well as trafficking in arms and people.