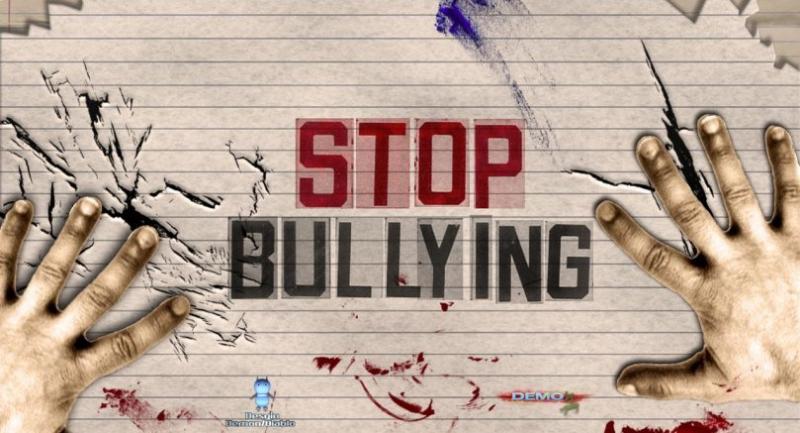 This campaign poster, created by Design Demon/Diablo from Mexico, promotes the need for society to take the bullying problem seriously and find ways to end it.

PROMOTING human rights in school is a sustainable solution for the bullying problem, academics said yesterday.

As the world marked the 70th anniversary of the Universal Declaration of Human Rights, the problem of bullying in schools was underlined as a particularly pervasive form of violence and discrimination, and one that has been largely ignored.

“Bullying is clearly an act of human-rights violation, because bullying acts intend to both physically and mentally harass the victim and oppress the victim’s dignity,” said Michael B Greene, a lecturer at Rutgers University’s School of Criminal Justice in the US.

“It is very necessary for us to deal with bullying, as even though this problem is very widespread it is commonly overlooked. So many students are still suffering from the loss of self-esteem and dignity without getting proper help from the school,” Greene said.

Bullying is a severe problem in Thailand and elsewhere. Earlier this year, the Mental Health Department disclosed that more than 40 per cent of the 600,000 or so students in Thailand were victims of bullying, while 80 per cent of students had witnessed bullying first-hand.

In order to tackle this serious issue, Greene urged schools to infuse a human-rights framework into the education system, so students can be educated about other people’s rights and dignity, and learn to develop respect for others.

“It is very important to create equality and fairness in schools, so as to nourish respect for dignity and the rights of others among children, because the school’s environment plays a major role in children’s behaviour,” Greene said.

“If children learn to care about and respect the feelings and rights of others, and understand the link between bullying and the right to be free from discrimination, the problem of violence in schools will be solved.”

He also stressed that teachers and school administrators should not overlook the problem of bullying among their students and ensure that all students are safe from harassment of any kind.

Every child is entitled to protection from all forms of physical and mental violence and abuse as per the UN Convention on the Rights of the Child, Greene said.

“Teachers and school administrators should get training in bullying prevention and intervention in order to efficiently uphold their students’ rights to a safe learning environment,” he suggested.

Dr Benjaporn Tuntasood, a child psychiatrist at Manarom Hospital, also agreed that bullying is a big problem that teachers and parents must take seriously.

“Many grown-ups see bullying as a small problem and assume that it is just teasing, but actually the victims of bullying are truly traumatised.

“If teachers and parents ignore bullied children, it can lead to more serious problems such as serious depressive disorders or even suicide,” Benjaporn said.

She added that it is not only the victims who need help, but the bullies too require attention and assistance from their parents and teachers.

“There are many factors that drive some children to bully the others. For instance, they may suffer from attention deficit hyperactivity disorder, maybe they are being raised wrongly or maybe they are victims of domestic abuse,” she said.

“Therefore, it is very necessary for every stakeholder to help these children – and more importantly, we must ensure a safe environment for every child both in school and at home.”