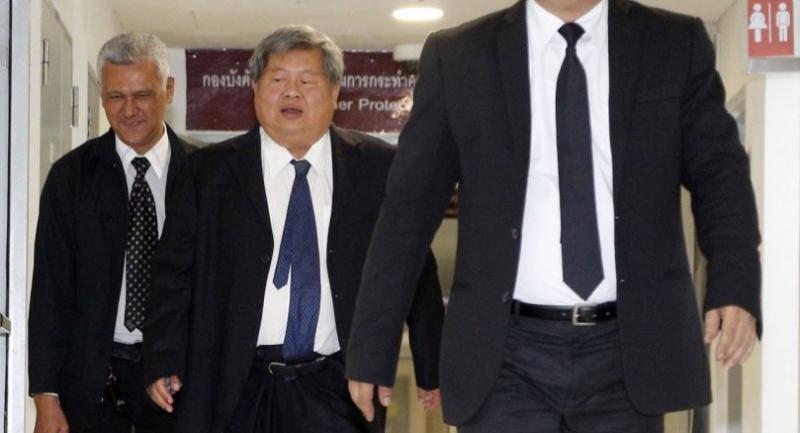 CONSTRUCTION TYCOON Premchai Karnasuta said he was “excited” to be appearing in court in Kanchanaburi’s Thong Pa Phum district yesterday to defend himself on poaching-related charges.

It was his first court appearance since being arrested in February at the Thung Yai Naresuan Wildlife Sanctuary.

He declined to talk to waiting reporters, saying only, “I’m excited”, when asked how he was feeling. He was using a walking stick.

The other defendants in the case, his four close aides, arrived at court separately.

Authorities confiscated the remains of a black leopard and two other protected species as well as rifles and other weapons from his camp at the sanctuary in February.

Four of his aides, including a woman cook, were also apprehended at the campsite and charged.

The arrests garnered both headlines overseas because Premchai runs an Italian-Thai construction firm that has won several government contracts.

Observers have expressed concern that he will be able to evade prosecution due to his connections with influential figures in Thailand.

However, the investigation soon expanded to his home in Bangkok and he and his wife were also charged with illegal possession of elephant tusks.

Yesterday was the first day for defendants to testify, beginning with Premchai, who gave his side from 9.30am until noon. After lunch, his aide and driver Yong Dotekrua testified. Yong is said to be a regular companion of Premchai on adventure excursions.

The afternoon session ended at 4.30pm and again the defendants refused to speak to reporters as they left court.

Their lawyers had initially told the court they would call 17 witnesses, but reduced the number to eight yesterday.

The hearing continues today with four other witnesses, including Natee Riemsaen and Thanee Thummart, who were arrested the same day as Premchai.

It is not known if Premchai will return to court now that his testimony has been recorded.