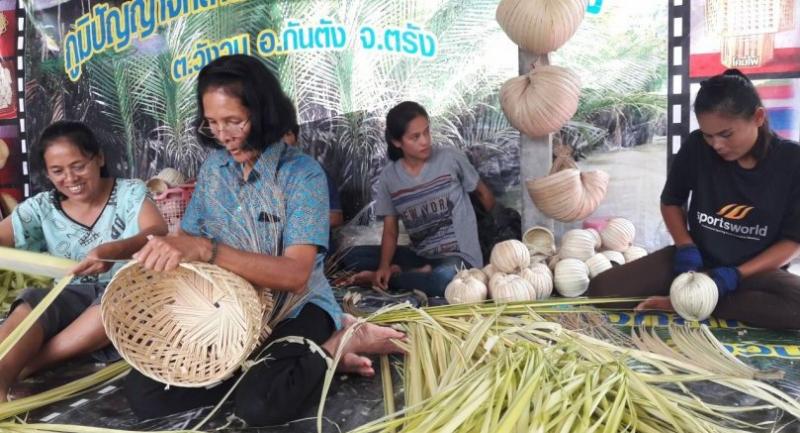 VISITORS TO three riverside communities in Trang province’s Palian River Basin are in for an ecotourism treat, thanks to a collaboration between the locals and a research project sponsored by the Thailand Research fund.

Research team member Fapilai Thaweesinsopha – who lectures on hotel and tourism at the Rajamangala University of Technology Srivijaya (RMUTSV) – said the project focuses on developing local sights and resources found to have tourism potential. Choices were made based on the sustainability of sites, as one-day and half-day tour packages were put together representing the communities’ unique charms. For Ban Laem, natural bio-diversity is combined with folklore such as the “Hua Laem” peninsular point and its whirlpool of three rivers (Khlong Thung Khai, Khlong Yan Ta Khao and Khlong Palian). Known for its fertility, locals have been farming oysters, mussels and fish in the area, and can offer fresh produce to visitors. “Hua Laem” also has a sacred spirit house for great-grandfather Thuchen, to whom fishermen pray for protection before heading off for a catch, and make loud noises in respect as they pass by on their boats. A 50-year-old Burma padauk tree also provides a mystical backdrop.

Another interesting site is the 800-rai Koh Lao Tam – comprising a 750-rai-mangrove forest and sandy beaches around a 50-rai dry area said to be an old graveyard for seamen. The burial spots are marked with wooden masts. This island – serving as a black crab conservation site – is great for camping and bird watching. The southern province of Trang is known for its six dragon beaches along the Thale Waek (Separated Sea) path revealed during low tide. Ban Laem has it own mini version known as the “baby dragon back beach”.

The research team chose to use Koh Hor Rai as a centre to build integrated tourism for the three communities, as the location offers many natural resources, such as the regionally-famous hard clams and fiddler crabs boasting oversized claws.

“We learned that tourists are more interested in natural attractions than cultural sites, so Koh Hor Rai and Ban Laem mini dragon beach have a high potential. Koh Hor Rai can cater to 100 visitors a day, while Koh Lao Tam can support 375 visitors daily,” Fapilai said. From Ban Laem, visitors can take a boat to Ban Hin Kok Kwai, featuring large rocks placed in circle as if to create a large pen for cattle.

This village, with 1,300 residents from three ethnicities – the Thai-Buddhist, the Thai-Muslim and the Thai-Chinese – is known as the Palian spellbound community. Besides showing off the famous San Chao Phra Roi Paed Roi Kao shrine built centuries ago by the Hainanese, the community also plans to re-open the Ban Hin Kok Kwai Nature Trail along the coast.

“We arrange one-day and half-day tours so visitors can visit key attractions such as Koh Hor Rai, Nam Khem Waterfall and Hin Kok Kwai and participate in activities such as collecting clams, visiting fish and oyster farms or checking out local handicrafts and products. Visitors in our initial tour groups said they found the tour enjoyable,” Fapilai said

A key selling point – as voted by tourists – was a demonstration of nipa palm leaves being torn, using both hands and feet, by the Nayotthong handicraft group in tambon Wang Won. This tambon is famous for making “Ti Ma” water carriers made of dried nipa palm stalks, which are very popular, but can only be produced in a limited number. To crank up the making of “Ti Ma”, RMUTSV Liberal Arts lecturer Noppadon Podkumnerd developed a solar-powered oven prototype, that can dry 2,000 to 3,000 nipa palm leaves within three hours, thus allowing for the production of 100 to 200 “Ti Ma” water carriers daily.

The machines, especially handy during the rainy season, have helped the villagers double their production capacity, he said.

to various tourism sites, including floating markets in Ayutthaya province. This has also helped generate jobs and boost income for local people. The community has now grown into 100 households from just 40. Prapapan Kantangpan, president of Tambon Wang Won Administration Organisation, said the project has helped create jobs, allowing families to earn extra income. Also, the increased production of “Ti Ma” water carriers has helped get rid of the nipa stems leftover from the hand-rolled cigarettes the community makes for export to Malaysia and Indonesia.

Prapapan said her office has asked the RMUTSV to produce at least 20 solar-powered ovens for other handicraft groups in the area.

The Palian River Basin has been officially opened as a tourism site since August, and can now cater to tour groups comprised of 12 people each time.

Next year, the development of tourist attractions in the Palian River Basin will focus on various aspects of community preparedness. Work integration will get special attention, so local administrative bodies, the Marine Department and tourist business operators can ensure attractions and related facilities remain up to par.