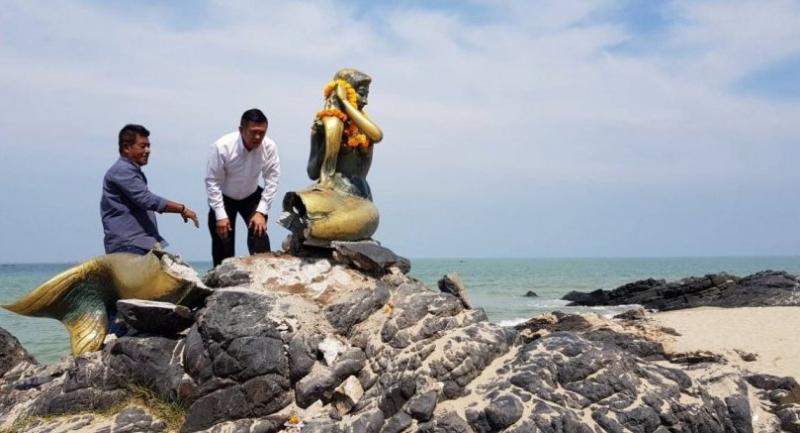 A mermaid statue on Simila Beach in Songkhla province is examined after being by damaged by two bomb blasts on Wednesday night. The statue is a landmark for visitors to the beach.

THE GOVERNMENT’S security tsar General Prawit Wongsuwan linked the bomb attacks in Songkhla yesterday to local politics in the southern province, contradicting intelligence units on the ground who suspected the Barisan Revolusi Nasional (BRN) were behind the blasts, in an attempt to disturb the southern business hub.

There were no casualties but two blasts on Wednesday night blew off the tail of a mermaid statue on Simila Beach in Songkhla. Five more bombs were found and defused in the vicinity of the beach, a famous tourist attraction in the southern province. Prawit, who as deputy prime minister and defence minister oversees security matters for the junta-backed government, said he was confident the incidents had nothing to do with the insurgency in the deep South, claiming that security authorities already knew who was behind the Simila Beach attack.

“The aim was to cause chaos during the New Year festival. The attacks may have stemmed from internal political problems in the province, though we cannot rule out separatists,” he said, without elaborating.

The explosions coincided with Prawit’s visit to the province to distribute land-title deeds among local people. The junta, which seized power in 2014, plans to call a general election in February next year. However, security officials on the ground said operative cells of BRN had triggered the blasts to damage the southern business hub during the New Year season, as foreign visitors from neighbouring Malaysia and Indonesia were about to flock to the area.

Evidence found at the scene indicated that the bomb was detonated by an electronic clock, suggesting the work of BRN insurgents, according to officials. Intelligence information also indicated that some operative cells of the group had been active in the area over the past weeks, an official said.

Songkhla is adjacent to the violence-ridden deep South, which has seen a spate of attacks since early 2004, claiming more than 7,000 lives so far.

Authorities in Bangkok have struggled to confine the violence to only the three southernmost provinces – Pattani, Yala and Narathiwat – but districts in Songkhla were attacked occasionally.

Despite Malaysian facilitation, attempts to establish peace talks with the insurgents over the past years have made no progress.

Deputy National Police chief Pol General Srivara Rangsibhramanakul urged the public not to panic over the bomb attack, saying police and other security officers were doing their best to find the attackers and ensure everybody’s safety during the New Year festivities. “The public should not panic. I have already ordered police reinforcements and stronger screening of people to build public confidence,” he said yesterday.

Unlike Prawit, Srivara reckoned the attack was aimed at causing turmoil during the festive period and did not have anything to do with local politics.

Songkhla Governor Veeranan Pengchan ordered local authorities to step up security measures in risky areas to provide safety to tourists. The explosion could have serious implications for the local economy during the New Year celebrations, he said.