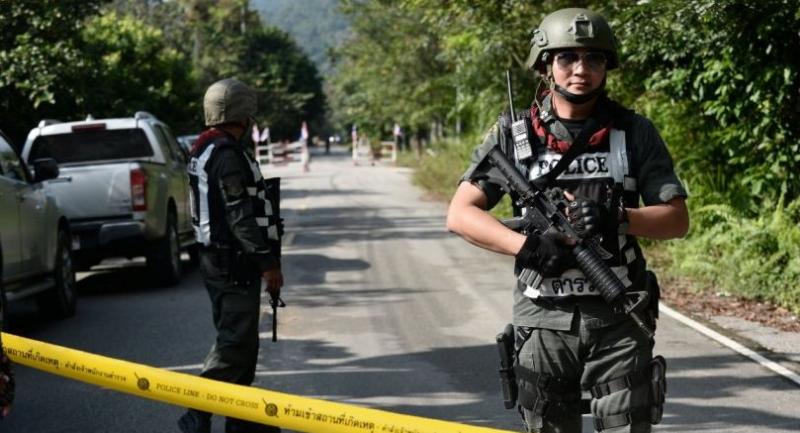 Thai security personnel guard an area following a bomb attack at a civilian volunteer base by suspected separatists the night before, in the Rangae district in the southern province of Narathiwat on December 29, 2018./AFP

The region bordering Malaysia has been in the grip of a low-level but bloody insurgency for more than a decade as ethnic Malay militants battle the Buddhist-majority state for greater autonomy.

Since 2004, insurgents armed with homemade bombs and grenades have clashed with Thailand's powerful military, killing nearly 7,000 people, mostly civilians, of both Muslim and Buddhist faith.

The homemade bombs were "detonated by radio", he said, adding that no one was injured.

The attacks prolong a bout of violence that began late Monday evening when a policeman died in an explosion from a detonated roadside bomb hidden in a gas cylinder.

Songkhla provincial police are still investigating the beach bombings, and no arrest has been made, police told AFP Saturday.

Major General Dussadee said the Songkhla bombings were not connected to his province's troubles -- which he said is payback for a December 12 raid on the insurgents' camp in Narathiwat.

"I think the militants are retaliating at authorities after the raid on their camp earlier this month," he told AFP.

"(Prayut) called them the works of ill-intentioned people and opportunists for staging attacks during New Year holidays," said Buddhipongse, adding that the junta head asked for locals to "tip off" authorities on any irregularities.

The three southernmost provinces -- Narathiwat, Yala and Pattani -- are predominantly Muslim and have long chafed against Bangkok's rule, calling for greater autonomy or independence.

The latest attacks come as the Thai junta renews talks with an umbrella group claiming to represent the rebels, with the aid of Malaysia as facilitator.

The shadowy Barisan Revolusi Nasional faction is believed to be behind most of the violence in the region, with its leadership living along Malaysia's border.