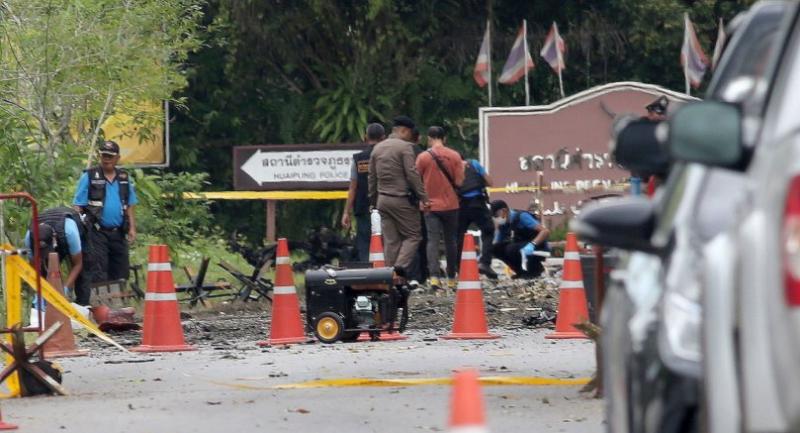 Forensic officials yesterday collect evidence from the site of a powerful car-bomb attack near a police station in Songkhla’s Thepa district that injured two police officers.

THE LATEST car-bomb explosion in Songkhla province yesterday left the public in shock after insurgents were suspected of killing a 62-year-old teacher and stealing his pickup for the attack. Security officials collecting evidence at the scene in Thepa district checked the almost totally destroyed vehicle and found that it belonged to a retired teacher, identified as Amata Samotantawee, in Sabayoi district.

When they went to his house, no one answered the doorbell. They broke into house and found Amata in the toilet, hanged from his neck. He was blindfolded and gagged and his hands were tied.

Police believe the attackers killed Amata, took away his pickup and packed it with explosives.

Amata’s relatives told police that they had talked to him the previous night, leading police to conclude that the murder had happened early yesterday. In a similar instance, militants in the South in 2017 murdered a merchant from Yala province after luring him with a promise of business before stealing his pickup and using it to bomb a Big C department store.

In August 2016, insurgents killed a mother and her young daughter to lay hands on their motorcycle and use it to launch an attack in October. Yesterday’s blast on a road in Tambon Tamuang wounded two police officers: Pol Colonel Sineenart Kongput, who suffered injuries to the chest and Pol Lieutenant Somnuk Kaewmun, who had a cut that required 10 stitches.

Security and bomb squad officials who rushed to the scene found Amata’s Isuzu pickup in a mangled mess from the impact of the explosion. Evidence at the scene led the officials to believe that the attackers hid the explosives inside the car and triggered them with a timer.

Pol Maj-General Pairoj Thamtam, a Songkhla commander, said his unit was tipped off about possible attacks in the area. He believed that the target of yesterday’s attack was a Songkhla task force, as the attack spot was on a road that was close to the officials’ knockdown accommodations. Pairoj identified the militants behind the explosion as allied with Bukorie Lumsoh, who has been active in the area. “Now the officers are putting pressure on his father in order to reach him,” he said.

Meanwhile, Colonel Pramote Prom-in, the spokesman of the Internal Security Operations Command (Isoc) Region 4, said that the attackers had placed improvised explosive devices in two 15-kilogram cylinders together with cut iron bars that were used as shrapnel.

The vehicle was believed to have been placed at the site before sunrise, the spokesman said.

Meanwhile, in Pattani province, a ranger guarding a school in Yarang district was injured when insurgents detonated a homemade bomb yesterday morning. Private First Class Sarawut Ahmamool, 28, from the 22nd Ranger Regiment was severely injured in the 8am explosion about 100 metres from the Thairath Witthaya 52 School in Ban Pong Sakho in Tambon Mohmawee.

Sarawut sustained shrapnel injuries to his body and arms and was rushed to Yala Hospital.

The bomb, which was hidden under a plant pot beneath a roadside marble bench, caused a 40-centimetre-wide and 20cm-deep hole.

Sarawut and five other rangers were stationed at the spot to provide morning security for teachers and students as they arrived at the school.