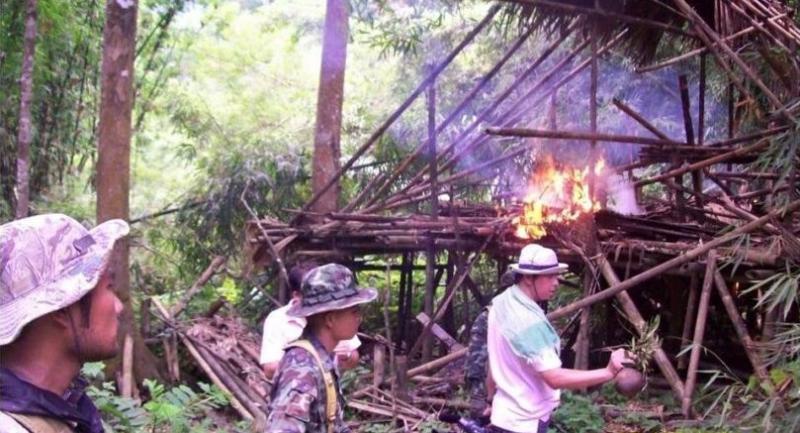 A file photo shows National Park officers at Ban Bangkloibon inside Kaeng Krachan National Park, during the 2011 operation to burn down the village and forcibly drive the Karen villagers out of their ancestral land.

THAILAND must follow the example of neighbouring countries and honour the constitutional right of Karen people in Phetchaburi’s Kaeng Krachan National Park to live on what has been their ancestral land for centuries, say academics.

Kittisak Prokati, a law lecturer at Thammasat University, said the Constitution recognises the communal rights of all indigenous groups in Thailand. Forcibly evicting the Karen from their land in the village of Ban Bangkloibon violated that right, he said. The action was not rendered legal simply because the National Park, Wildlife and Plant Conservation Department (DNP) was in charge, he said.

Kittisak made the comments at an academic seminar yesterday at Thammasat, sponsored by the Cross Culture Foundation. Speakers discussed the “Communal Rights of the Karen Community in Kaeng Krachan National Park and the Supreme Administrative Court’s Verdict”.

The court ruled last year that the DNP acted unlawfully in burning down Karen homes in Ban Bangkloibon and forcing them off their ancestral land inside the national park. It found that DNP officials failed to follow proper legal procedure and acted excessively harshly.

Kittisak lamented that the verdict failed to acknowledge or order the preservation of the communal rights of the Karen.

Chaiwat Limlikhit-aksorn, then head of the national park, led officials in May 2011 in “Operation Tenasserim” to forcefully drive the Karen from the rainforest. It labelled the Karen, who had lived in the park for centuries, as “illegal migrant forest encroachers from Myanmar”.

Ninety-eight houses in Ban Bangkloibon were burned down, along with personal belongings they held, and the community was moved downhill to Ban Pongluek.

No compensation was offered, an oversight that the Supreme Administrative Court ordered corrected, Kittisak noted, but the court made no comment on rights violations and there was no direction to rectify them.

“This verdict should have directly considered the violation of Karen rights as the first priority, because it was against the highest-status law – the Constitution,” he said.

Only after that had been examined should the court have considered “the appropriateness of the actions of the national park officers, [drawing] on lower-level law – the National Park Act”, he said.

“In other countries, such as Australia and Malaysia, there are many examples of court cases over similar issues, of preserving the rights of indigenous people versus preserving natural resources. And the courts in those two countries ruled in favour of the indigenous people, based on the higher status of the law protecting human rights.”

Kittisak warned Kaeng Krachan National Park officials they could be in violation of the Supreme Administrative Court ruling. Even though they lost that case, they continue to file more complaints with police against the Karen community, accusing them of forest encroachment.

Thammasat University vice rector Parinya Thewanaruemitkul said that, in August 2010, a year before Operation Tenasserim, the Cabinet resolved to restore and preserve the Karen way of life, including the resolution of conflicts related to their cultural identity and practices.

“We can see that [officials of] Kaeng Krachan National Park had no regard for the Cabinet resolution … despite its utility as a tool to find common ground together and peacefully solve the conflict,” Parinya said.

“I strongly suggest that the DNP adhere to the Cabinet resolution and Supreme Administrative Court verdict to end all conflict with the Karen community. It is not too late to right the wrong.”

Narumon Arunotai of Chulalongkorn University, who does research on indigenous peoples, said the Kaeng Krachan conflict bore similarities to others involving indigenous groups elsewhere in the region. All are rooted in the authorities’ lack of understanding of different cultures and ways of life.

She urged the authorities to reconsider their attitude. Indigenous people are not encroaching on woodland or blocking efforts to preserve natural resources, she said. In fact, their presence in the forests helps in the conservation of nature and vulnerable ecosystems.