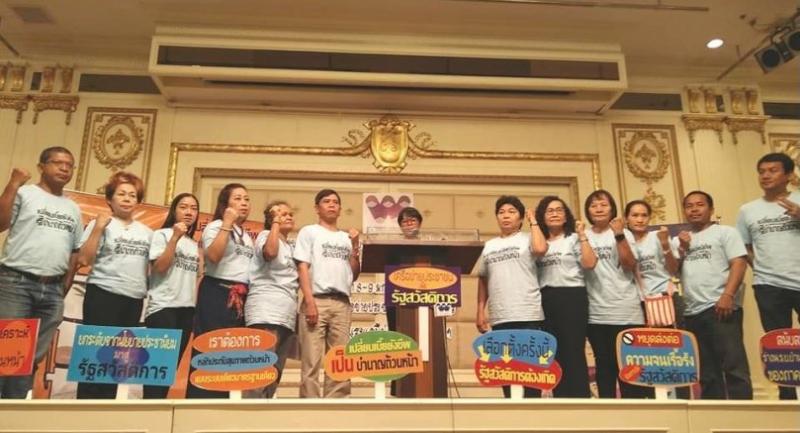 THAILAND needs to provide a pension to all its senior citizens to mitigate the impacts of two major problems – an ageing society and economic disparity – welfare campaigners urged.

The We Fair Network yesterday said at a press conference in Bangkok that the government must provide universal pension of not less than Bt3,000 per month to all senior citizens, to combat the problems of poverty and severe economic disparity in Thai society.

The network’s representative, Sureerat Threemanka, highlighted that Thailand was fast becoming an aged society and at the same time the country is ranked as having the highest economic disparity rate in the world. He said the current administration had done nothing to improve the situation.

Sureerat said the government not only lacked a clear strategy to tackle the wide wealth gap and poverty, but it also had been making these social issues more serious due to many of the government’s harmful policies. These had resulted in land grabbing, lack of public participation in local natural resources management and insufficient public welfare.

“We ask the political parties taking part in the upcoming election to recognise and comply with our demand to sustainably tackle the economic disparity and poverty problems by providing a universal pension at a rate no less than the poverty line of Bt3,000 per month so as to provide monthly income assurance to all retirees,” she proposed.

“We believe that the universal pension will relieve the troubles of poverty in an ageing society. However, this policy needs radical reforms in tax collection, resource distribution, and national budget management to ensure efficient welfare for all citizens.”

The network highlighted in the statement that the current pension is a clear example of economic and social disparity in Thai society. A minority group of people, who serve as civil servants, are getting the highest pension from the government when they retire, while those who work in the private sector or are self-employed are getting a significantly smaller pension amount from the government; they have to rely almost entirely on their own savings.

Currently, the government provides a monthly allowance for senior citizens aged 60 years and above of Bt600 to Bt1,000 per month.

The network added that its ultimate demand is to create universal welfare for all to ensure that everyone will have income assurance at every stage of their life. This could be achieved by adjusting wealth distribution, by not concentrating on a minority population group.

“Our country has sufficient resources for all of us; we just need fair distribution of resources to ensure that everyone gets equal benefits from our country’s wealth,” the statement read.