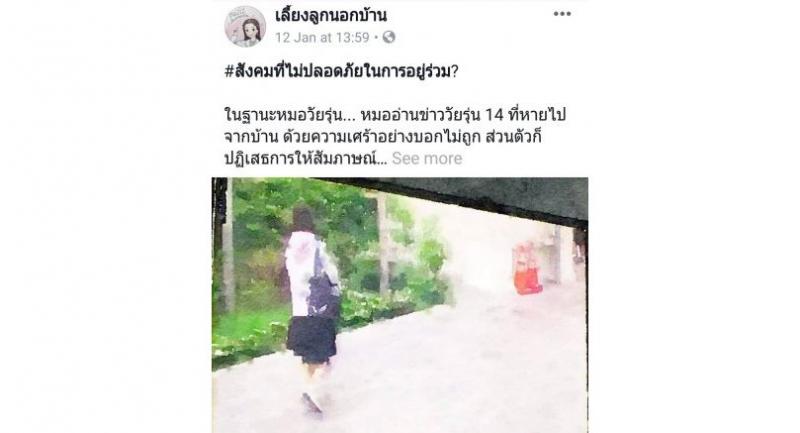 SOCIAL-MEDIA USERS have blasted news media outlets for invading the privacy of a 14-year-old girl who was reported as missing but turned out to be travelling with a much older man.

The collective voice of the Internet proved its might again, with many self-regulating media organisations issuing statements over the weekend demanding that their members toe the legal line and refrain from adding salt to the wounds of a young victim.

“Now that you have identified her, with photos and all, will the girl still have a place to stand in the society?” Mati Bamrungkunaporn wrote on the “kendekthai” Facebook page late last week.

He said he was worried for the girl, whom officials said was under stress and saying little to anyone. The girl was reported missing by her parents on December 27. Her name and photos were released to the public and media in the hope someone would see her.

She was found unharmed on Thursday, but some media outlets wanted more details. Reporters went to the extreme of sifting through the garbage bin at her place in search of clues. The revelation upset many people following the story online.

Prasith Thawornpisarn said on the “takekidswithus” Facebook page that the authorities should take legal action against media outlets that violated laws governing reporting.

In response to the outcry, the National Press Council of Thailand, Thai Journalists Association and Online News Providers Association (SONP) issued statements reminding their members to strictly adhere to ethics and the law.

SONP urged its member-outlets to delete from their online pages the girl’s name and address, the name of her school and any other reference that might give clues to her identity. It asked Google (Thailand) to help in the purge.

SONP said its members should stop reporting the story in a way that could hurt the girl and her family in the long run.

“Any updates to the news should only be based on information officially provided by the police,” it said.

The owner of the “takekidswithus” Facebook page, who calls herself Dr O, said everyone should treat the young teen the same way they would want themselves or their own child to be treated in such circumstances.

“The girl’s rights should not be violated,” she said.