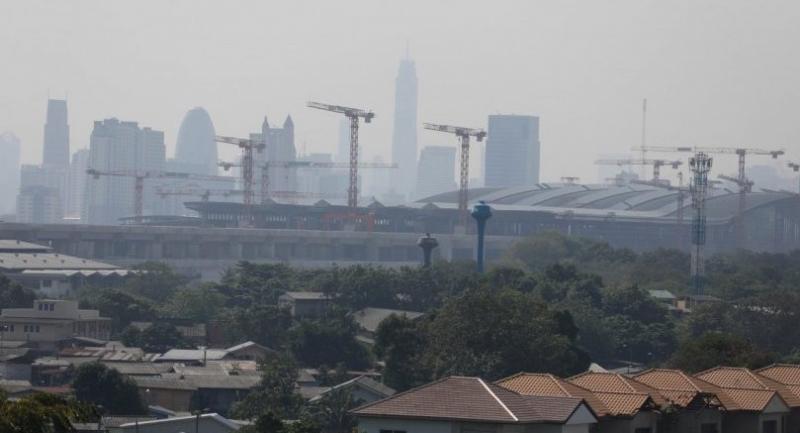 The skyline around Bang Sue Central Station wears a shroud of smog yesterday morning. Dust rising from construction sites is blamed as one of the major factors contributing to the city’s worsening air pollution.Nation / Tatchadon Panyaphanitkul

They pointed out that the country would face billions of baht in additional health costs unless the severe air pollution blanketing the capital was promptly curbed.

The pollution continued to remain at harmful levels for the third straight day yesterday and the situation was likely to remain critical for at least another month due to weather patterns, said Witsanu Attavanich, associate professor of economics at Kasetsart University.

He feared both state agencies and the public were largely underestimating the dangers of air pollution and proper prevention and mitigation measures were still inadequate. Bangkokians awoke yesterday morning to find their city once again smothered by thick smog that reduced visibility to just one kilometre in some areas. It was not regular winter fog but a deadly cloud of fine dust particles and other air pollutants, according to China-based air-pollution monitoring website http://aqicn.org. The site reported that the PM2.5 air-quality index (AQI) in Bangkok yesterday reached a peak of 195, an unhealthy level, while some areas such as Bang Khen district were at hazardous levels, with PM2.5 AQI at 394 yesterday morning. The site forecast that Bangkok would face harmful levels every morning for the rest of the week because there was little wind.

Nevertheless, people wearing facemasks remained a rare sight around the capital. Many children and seniors could be seen going about their outdoor activities as usual.

“Air pollution is really a silent killer and many Thais underestimate the danger to their health, so not many people protect themselves by wearing a facemask or installing air purifiers at home,” Witsanu said. “The official air pollution warning system is also too weak and doesn’t reflect the true severity of the situation,” he said. “Thais don’t have lungs of steel, so we need to consider the environment and people’s health before we pursue economic growth.”

According to his research on pollution-related health costs in 2017, every microgram of PM10 beyond the safe limit cost the people of Bangkok up to Bt18.42 billion in medical expenses.

While his research did not examine financial impacts that PM2.5 pollution triggered, Witsanu said medical costs are definitely much higher because PM2.5 has a greater impact on health. The current pollution in the capital will cause immeasurable additional health expenditure, he warned. “We all know that air pollution is not a new problem in Bangkok, and agencies such as the Bangkok Metropolitan Administration [BMA] and Pollution Control Department [PCD] already have mitigation measures to tackle the problem. But our question is whether these measures are being strictly implemented and whether they can truly mitigate the problem,” he said. Witsanu emphasised the importance of the authorities taking air pollution seriously and immediately tackling the problem at its root. He called for monitoring construction sites and limiting cars on the streets, rather simply telling people to wear facemasks. He urged everyone to spread the word about air pollution.

Environmental-health expert Sonthi Kotchawat cautioned that PM2.5 was so harmful because it’s very fine dust particles, small enough to pass through the lungs and enter the bloodstream. Long exposure can cause respiratory diseases, including lung cancer, heart disease and stroke, he said. Sonthi said it was important to mitigate air pollution at its roots by controlling outdoor burning, implementing pollution controls in the transportation sector and curbing the use of fossil fuels.

He urged the PCD to not merely issue warnings, saying its officials are obligated by law to mitigate the pollution at its source and protect the environment and public health.

BMA Environment Department director Chatree Wattanakhajorn said his agency has issued a ban on outdoor burning, was monitoring pollution-control measures at all construction sites, and was constantly cleaning the roads.

The Pollution Control Department has introduced measures to improve its system for measuring air quality, but Greenpeace Thailand country director Tara Buakamsri said there is still room for improvement to ensure safe air. Here are his suggestions.

3 Promote the use of clean, renewable fuels in the transportation sector.

6 Give people incentives to walk, ride bicycles and switch to electric vehicles.

8 Add more urban green space as much as possible.

With air pollution in the capital continuing to intensify, residents should follow this checklist to safeguard their health.

- Stay indoors as much as possible – especially the elderly, children and people already ailing.

- Keep doors and windows closed at all times.

- Change your clothes and take a shower immediately on returning home from outside.