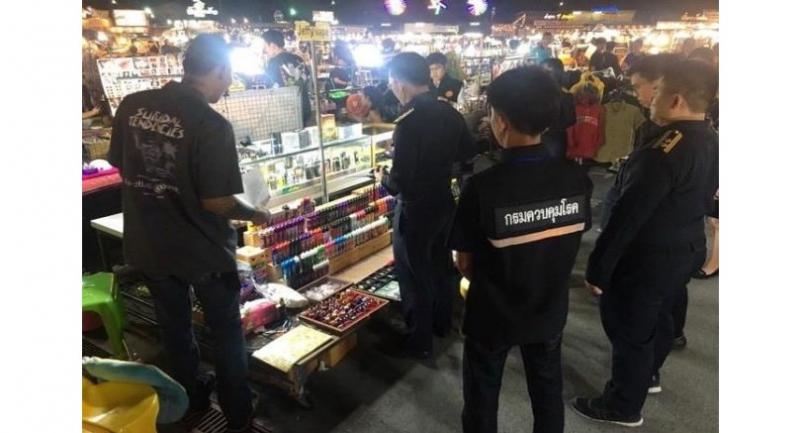 Officials from the Department of Disease Control’s Bureau of Tobacco Control and Office of the Consumer Protection Board arrest vendors selling ecigarettes and nicotine chargers last month at the Liab Duan night market in Bangkok’s RamIndra area.

A REVIEW of the ban on e-cigarettes is being launched in light of difficulties in enforcing the law.

A working panel led by the Commerce Ministry has assigned the Tobacco Control Research and Knowledge Management Centre (TRC) to conduct a study in response to legal hurdles affecting implementation of the ban.

The panel was set up late last year to reconcile conflicting opinions on both sides of the debate about banning e-cigarettes and how to enforce the ban, its chair Keerati Rushchano, deputy director-general of the Department of Foreign Trade, said.

In 2014, Thailand banned the import, sale and servicing of e-cigarettes, with violators facing punishment based on notifications from the Commerce Ministry as well as orders from the Consumer Protection Board.

“But since imposing the ban, authorities have encountered problems with law enforcement,” Keerati admitted to The Nation.

The tourism authority raised concerns that foreign tourists were complaining that they had not even heard about the measure before arriving in the Kingdom.

While the rule bans the import and sale of the devices there is no specific prohibition against actually smoking e-cigarettes, causing confusion among law enforcers, the chairman noted by way of an example of enforcement problems. “Hence, to solve the problem for the long term, the TRC was assigned to study a [workable] approach towards regulating matters related to e-cigarettes,” Keerati said.

The TRC will take some six months to complete the study, he said, after which the panel will decide what to do. Whatever leads from the study, it is certain that e-cigarette paraphernalia cannot be imported freely.

The final result, however, will ensure appropriate measures are in place, whether it is the existing ban or another appropriate one such as requiring import licences and registration, he added.

As for tourists, related government agencies will make an effort to send a clear message to ease confusion, he said.

However, representatives from concerned authorities have offered different opinions about the ban at the panel meeting, sources told The Nation.

Public Health Ministry officials are insisting that the ban on e-cigarettes remain, as they believe the devices are hazardous to health and will encourage youngsters to start smoking.

On the other hand, the Food and Drug Administration said it is open to dealing with companies that want to import the devices to Thailand and could register the devices as controlled medicine.

The Customs Department told the panel that it was ready to levy higher taxes if the import of e-cigarettes is permitted.

Last year, The End Cigarette Smoke Thailand group submitted 40,000 signatures in a campaign to legalise e-cigarettes. The group suggested that e-cigarettes be viewed as a “controlled” rather than “banned” substance.