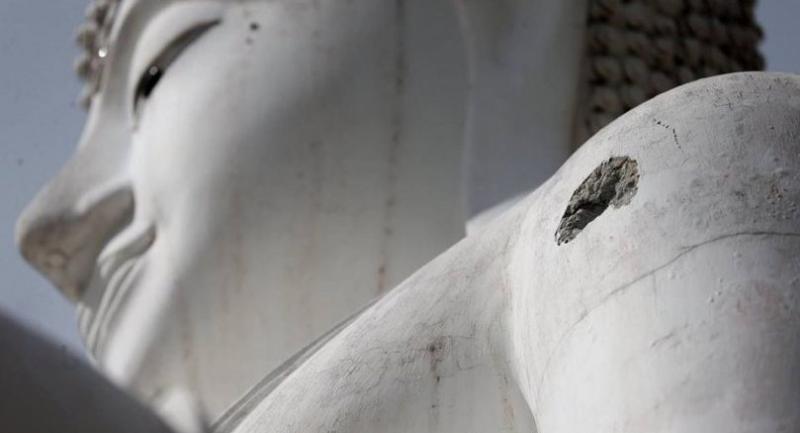 IN AN attempt to calm fears about the security situation in the deep South, Prime Minister Prayut Chan-o-cha issued a statement yesterday urging the public not to lose faith in his government’s efforts to bring an end to the conflict in this historically contested region.

The people behind the deadly attack on a temple in Narathiwat province last week wanted to provoke the forces into launching a forceful crackdown and in the process draw international attention to the situation in the South, Prayut said.

“Those who were behind the attack in Narathiwat’s Sungai Padi district on January 19 intended to destroy the morale, spirit as well as the patience of Thailand in using peaceful methods to solve the ongoing conflict and violence in the South,” he said in the statement.

His security tsar, Deputy Prime Minister Prawit Wongsuwan, urged security officials on the ground to exercise utmost restraint, to desist from any revenge motives, and to take recourse to the country’s justice system.

Analysts said there was nothing new in the government’s reaction. Prayut sounded very much like a broken record when he accused the separatist militants of trying to provoke a nasty retaliation by the security forces, of killing monks in order to discredit Thailand’s “peaceful approach” to the conflict, and of using violence to attract international attention.

Judging from the tone and content of his statement, it is clear that Prayut is worried about his legacy. He has been in power since the military coup in May 2014 and there is hardly anything that he and his government can point to in terms of success or progress in the deep South. The government spent the past three years barking up the wrong tree, talking to MARA Patani – which has no control over the insurgents on the ground – about a quirky Safety Zone Project.

Thai negotiators were led to believe by the previous Malaysian government – the official facilitator of the talks with MARA Patani – that a breakthrough was round the corner and that the separatist Barisan Revolusi Nasional (BRN) would come to the table for face-to-face talks with the Thai negotiator, respect the Safety Zone and observe the ceasefire. None of that was true.

When a new government came to power in May last year in Kuala Lumpur, led by veteran Mahathir Mohamad, it adopted an all-or-nothing approach with the BRN leaders – come to the table to negotiate with the Thais or face unspecified consequences. The BRN leaders decided to go into hiding, sources said.

The problem with this strong-handed approach was that the BRN leaders and its political wing did not have a chance to prepare for the peace process, they said.

The authorities in Bangkok knew that the peace process was uncharted territory for BRN leaders.

They did not want the international community to work with the movement to prepare them for possible talks.

Today, that zero-sum game approach is returning to haunt the authorities.

Peace negotiations may be a no-go area for the BRN, but it does not mean that they will not come to the table someday. But the process, which can lead to that day, is yet to start.

The ongoing pressure on these leaders, coupled with the killings of imams in recent months, as well as allegations of torture in detention centres, have resulted in nasty retaliation from the militants on the ground.

Prayut should have thought about his legacy four years ago, when he decided to continue with the peace initiative that was started by the government he ousted.

Pressuring the BRN leaders to come to the table so that Bangkok can claim some sort of a breakthrough will only invite more retaliation on the ground.

Moreover, his defence planners should have seen the writing on the wall after the targeted killings of three imams in recent months. There is an unwritten rule that Muslim and Buddhist religious leaders and children should be free from harm. The past decade, unfortunately, has seen bloody retaliations whenever this ground rule has been violated.

The BRN militants look at their leaders as spiritual figures. And when these “spiritual leaders” get targeted, they stoop to a no-holds-barred approach. The past 15 years is a testimony of this sad reality.