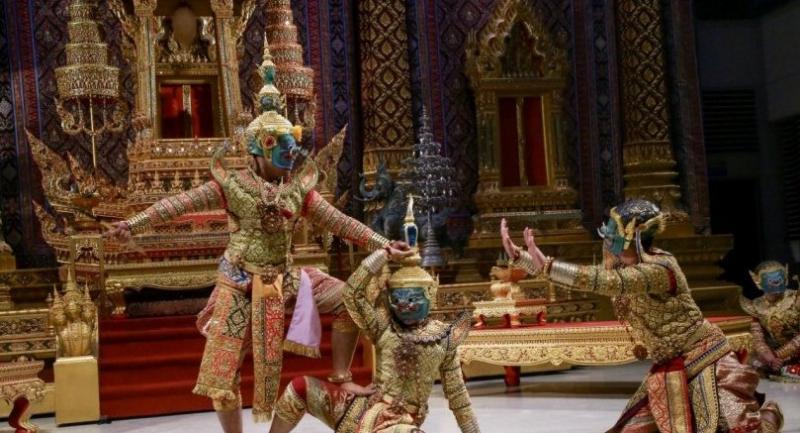 Culture Ministry has a raft of Khon-related activities planned for Asean Cultural Year ahead.

Now that Thailand has the rest of Southeast Asia’s attention, it’s preparing to show off

ThanksKhon will be taking centre-stage throughout the year as Thailand takes its turn chairing the 10-member Association of Southeast Asian Nations in what’s been designated Asean Cultural Year.

Steeped in tradition and mythology, mesmerising in its movements and dazzling in its costuming, the masked dance as presented onstage will be sharing the limelight with |animated film and scholarly seminars, Culture Minister Vira Rojpojchanarat has announced.

The ministry’s Department of Cultural Promotion is planning a yearlong calendar of activities based on khon, which in November was added to Unesco’s Representative List of the Intangible Cultural Heritage of Humanity. The programme opens next month with traditional khon performances of episodes from the Ramayana at the National Theatre in Bangkok, continuing through March, after which the troupe will tour upcountry.

A new animated feature commissioned by the ministry, “Rama Avatar”, will premiere in March before going into national release, capitalising on the success of last year’s “9 Satra”.

Bangkok will host a Khon Festival from April 4-6 that will include in-depth discussions about how the art form can best be preserved for future generations to enjoy.

Public enthusiasm for khon has dwindled in recent decades. Originally performed in the royal court before becoming a staple of temple fairs, it has enjoyed a revival this century thanks in large part to the support of Her Majesty the Queen, in whose honour the Royal Khon Performances are presented annually in the capital.

The Khon Festival will also feature an exhibition of the elaborate costumes worn by the recurring cast of characters and demonstrations of how they and the masks and jewellery are created. The stage will be in continuous use as dancers – both rookies and masters –share and compare their talents.

An international symposium, “Khon: Intangible Cultural Heritage of Humanity”, will take place at Thammasat University at the end of April. Interest is likely to be especially keen in discussions with experts from Cambodia, which has a similar masked dance also recognised by Unesco, known as khol. Although masked dance performances can be seen through Asia, Thai khon has its own unique identity, incorporating different fields of the arts, literature, ritual and craft, scholars agree.

It has held audiences here spellbound since the Ayutthaya Period and continued to be a popular form of entertainment into the Rattanakosin Era.

The Queen’s great achievement, Minister Vira pointed out, was in bringing khon into the 21st century with vast and fantastical annual renderings of chapters from the Ramayana – the Ramakien, as it’s known in Thailand.

“She ordered a complete redesign of the costumes and ornamentation, the makeup, stage, format, lighting and sound, turning it into a royal khon performance,” he said. Also deserving much credit for keeping the art form alive is the late MR Kukrit Pramoj, Thailand’s prime minister in the mid-1970s and himself a khon master.

His Kukrit Foundation continues to train young performers and presents its own annual shows.

The year ahead will also have regular khon performances at Bangkok’s Sala Chalermkrung Royal Theatre, and meanwhile people of all ages can even learn the movements themselves.

Several educational institutions including secondary schools offer courses on the masked dance, and the Demonstration School at Srinakarin Wirot University’s Prasarnmitr campus in Bangkok has a khon troupe for children. What still has to be worked out at the Culture Ministry is a long-term plan for the sustainable management of khon.

“After the boom in promotion this year, there’re no long-term plan for sustaining it as an art form,” acclaimed contemporary dancer-choreographer Pichet Klunchun pointed out in an interview with The Nation Weekend. “Khon might not survive as a profession, apart from performers employed by the ministry.”

Pichet is the Thai artist who’s done more than any other to introduce “modern khon” to the world, and for his effort has drawn complaints from some traditionalist masters of the form. Pichet in fact learned masked dance from National Artist Suwannee Chalanukrou, a khon master, and veteran performer Chiyos Khummanee. But he conceived a post-modern form by combining it with Western ballet and modern dance. He has been known to perform naked except for a mask.

Pichet has collaborated with foreign artists in modernising khon, while his Pichet Klunchun Dance Company trains a new generation and the Chang Theatre in Bangkok he runs with his wife Sojirat Singholka stages eye-opening performances.

In the performance exhibition “The Intangible of Emptiness”, continuing at the Artist+Run Bangkok Gallery, he criticises the way khon is treated.

“He believes the government should reassess khon and find ways to create viable careers in it.

“As long as we treat khon as a high art, it’s untouchable and cannot evolve into new forms. We believe it’s already perfect, so there’s no room for creativity. It’s being kept far from everyday life.

“The government should establish a national khon company like the dance companies they have in the West,” Pichet said. “The dancers would be full-time performers and could survive. The government support it financially, but allow a professional art-management team to |run it.”

Pichet, whose rock-star-style khon masks appear in several overseas museums and galleries, was reinventing traditional Thai art forms for years before the Culture Ministry honoured him with a Silpathorn Award in 2009.