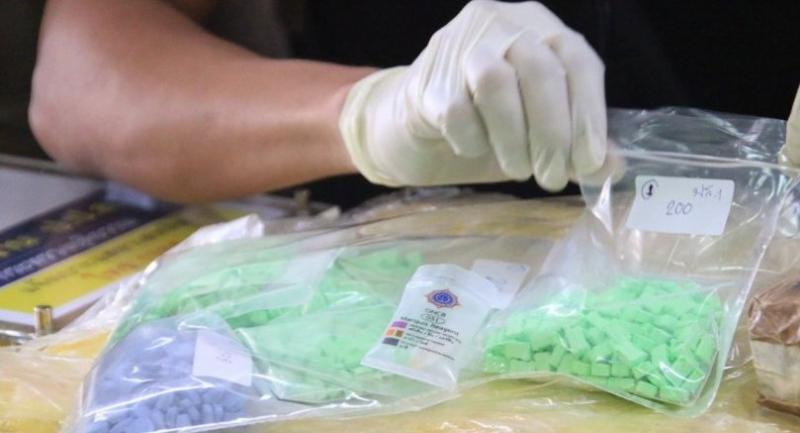 The Police Narcotics Suppression Bureau recently made seven drug busts that netted 10 suspects and resulted in the confiscation of 10 million methamphetamine pills and nearly four kilograms of heroin. Among the seven drug busts, there were three key cases including the arrest of Surachai Bese, 27, on Monday night in Chiang Rai with 4 million methamphetamine pills he is alleged to have smuggled from a border location.

Chalermkiat said the second case saw drug suspect Polawat Lungsikaew, 23, killed in a shootout with Army troops in Chiang Rai while attempting to smuggle 2.8 million methamphetamine pills into Thailand from Myanmar on Sunday night. Police are hunting for Polawat's accomplice who escaped, he added.

In the third case, a 46-year-old bus driver Prom Rattanakrajang and his elder brother Thanathip, 50, were arrested on January 20 along with 2.82 million methamphetamine pills in Chiang Rai.

Police also seized nearly 5,000 ecstasy pills hidden inside a Santa Claus stuff toy, a train-shape pillow and some toy boxes in three packages mailed from other countries and expect to arrest the senders and recipients soon, he said.

Chalermkiat also said that the police drug suppression in the past three months since November 2018-January 2019 had seen 113,000 drug busts which confiscated a total of 248.4 million methamphetamine pills, 4,324 kilograms of "ice", 442 kilograms of heroine, and 3,454 kilograms of marijuana.

Preventive measures have been implemented in 14,820 villages nationwide under the Prachakhom Mooban Tortan Yaseptid (Civil Society Villages Fighting Against Drugs) project, he said.