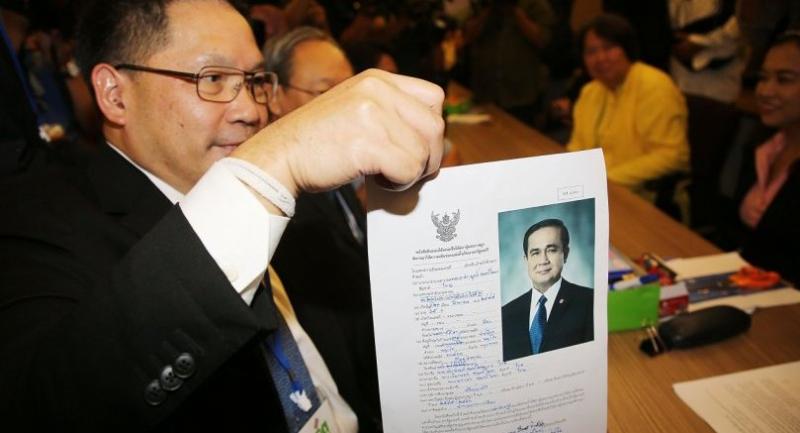 By Kas Chanwanpen
The Nation Weekend

This announcement clearly put the general in an awkward position.

Apparently, Prayut had waited until almost the last minute before making a decision, mainly because he was waiting to see Thai Raksa Chart’s next move, which now appears to be marking a new milestone in Thai history. This is the first time that a member of the Thai Royal Family has joined politics.

Yet, in the statement, the junta leader only said that he accepted Phalang Pracharat’s invitation after careful deliberation of its policy proposals.

The general, who toppled a civilian government in 2014, wanted to see if the proposals were in accordance with the junta’s initiatives over the past five years.

“This decision was not easy, because it is such a critical period for the country,” he said. “I’ve been a soldier all my life and I’m ready to sacrifice my life to protect the country.”

As for criticism about his current role, the prime minister denied he was trying to cling to power. He said his only aim was to protect the national interest.

On Thursday, Phalang Pracharat’s two other nominees – its leader Uttama Savanayana and Deputy PM Somkid Jatusripitak – withdrew their names from the PM nominees list. Both decided to give way to Prayut, saying the general was the perfect candidate considering the current situation.

Uttama handed Prayut’s name to the Election Commission on Friday afternoon, and told the press that he had not had a chance to talk to the prime minister yet as Prayut had only decided in the morning and the list had to be handed in by 4.30pm on Friday. Uttama also stressed that Phalang Pracharat’s stance remained unchanged – it aim is to help develop the country, not help Prayut retain power. However, he declined to comment on Thai Raksa Chart Party’s choice of PM candidate, only saying it had the right to propose anyone it chose.

Other political figures also avoided making any concrete comments on the matter.

Deputy Prime Minister Wissanu Krea-ngam said: “I have nothing to say about this [Ubolratana becoming a PM candidate]. No comments on both the legal matters or facts.”

With reporters bombarding the government’s legal expert with questions, Wissanu’s only response was: “I’m not answering. I don’t know.”

As for whether this turn of events made him feel frustrated, Wissanu said he felt nothing.

Key Democrat Party member Warong Dechgitvigrom posted on Facebook: “The news has made me confused, but now I’ve regained my power, I will continue to campaign. We have to fight for our country.”

Pro-democracy party Future Forward leader Thanathorn Jungroongruangkit said he had no problem with who runs for the PM’s post, provided they are qualified and eligible.

However, he pointed out, that this move may have brought things to square one – dissolving the colour-coded politics. He said now voters can choose their side again.