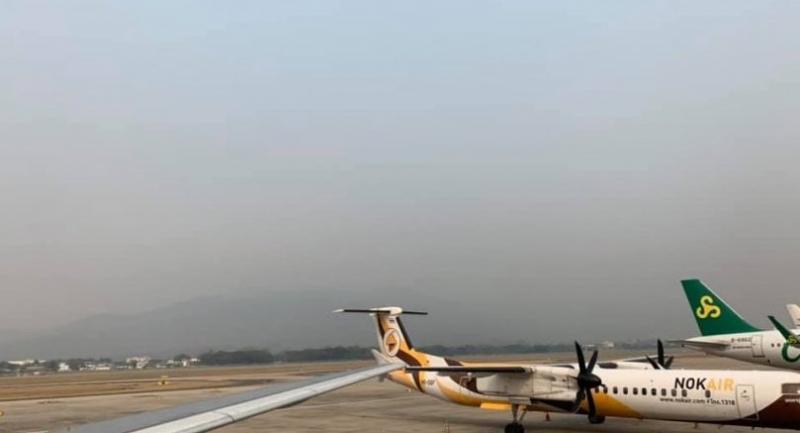 Residents in many northern provinces were on Tuesday breathing air containing more than double the country’s official safe limit of PM2.5, particulates of 2.5 micrograms or smaller per cubic metre, according to the daily update from the Pollution Control Department’s website. (air4thai.pcd.go.th) Sky over the area at the foot of Doi Suthep turned brown due to a toxic haze on Tuesday morning, a striking change from the same area’s blue sky on February 5. The photos were taken from the30th Anniversary Building at Chiang Mai University’s Engineering Faculty. // Photo courtesy of Climate Change Data Centre’s Facebook page

Airquality problems therefore have now posed a big concerns, as residents in many northern provinces have lately breathed air containing more than double the country’s official safe limit of PM2.5.

For example, the amount of PM2.5 peaked at between 106 and 136 micrograms per cubic metres on air in various districts of Lampang .

Lampang responded to the recent jump in toxicity by closing its Doi Phra Baht forest, currently ravaged by multiple spots of fire, from Tuesday until April. They will set up checkpoints to deny unauthorized access by outsiders who are not involved in fighting the forest fires, according to the resolution of a Lampang meeting of related agencies on Monday afternoon.

The PCD’s method of basing their numbers on averaging the 24-hour levels, resulted in their reporting lower levels of pollution when compared to the real-time basis reports from other sources, such as the Chiang Mai University mobile “Dust Boy” devices and the Chiang Mai Air Quality Health Index (CMAQHI) Centre. Chiang Mai provincial authority announced imposition of a 60-day outdoor-burning ban from March 1 to April 30. People giving useful information leading to a culprit’s arrest will get a cash reward of Bt5,000.

In the wake of the haze, the public health authority warned people to wear a facemask during outdoor activities. They also advised members of “vulnerable” groups such as small children, senior citizens, pregnant women and those with chronic ailments to avoid being outdoors. A facemask of N95 standard is needed to filter the tiny PM2.5 particulates.