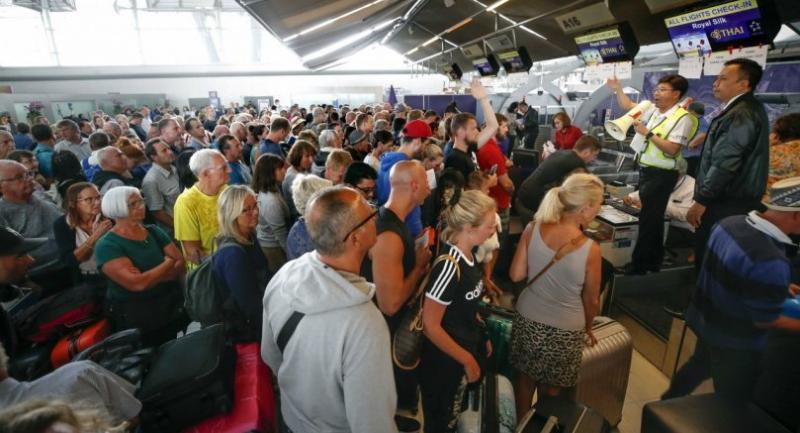 Stranded tourists whose flights have been canceled, queue and listen to a man with a megaphone giving some information at the Thai Airways counter at the Suvarnabhumi International Airport in Bangkok yesterday. // EPA-EFE PHOTO

THAI AIRWAYS International (THAI) yesterday resumed its flights from Bangkok to Europe after cancelling some the previous day due to Pakistan’s closure of its airspace. Stranded passengers wait at the check-in area at the Suvarnabhumi International Airport in Bangkok on February 28, 2019. // AFP PHOTO

The national carrier also plans to provide special flights to some select countries in Europe in order to |help passengers get to their destinations.

Around 4,000 passengers were stranded as 16 flights arriving and 20 departing from Bangkok’s Suvarnabhumi Airport were cancelled after tensions with India led Pakistan to close its airspace.

Of the cancelled flights, 21 were of THAI, to and from Europe, and six to and from Pakistan.

THAI usually flies over Pakistan’s airspace when going to or returning from Europe, but after the closure, the carrier had asked for authorisation to fly over China’s airspace, the airline said yesterday.

Flight Lieutenant Pratana Patanasiri, THAI’s vice president for aviation safety, security and standards, said the national carrier has received permission from authorities to fly over China. However, he said, the permission was granted on a daily basis, so the airline needs to update the situation daily.

Also, he said, flying over China actually cuts the flying time down by 20 minutes.

Meanwhile, a source from THAI said the national carrier has unofficially been given permission to provide special flights to substitute the flights to Frankfurt, London and Moscow that had been forced to return to Suvarnabhumi on Wednesday. Stranded tourists whose Thai Airways flights have been canceled, wait for news at the Suvarnabhumi International Airport in Bangkok, Thailand, 28 February 2019. // EPA-EFE PHOTO

THAI is also seeking cooperation from its allied airlines to transfer passengers, and has asked for permission to arrange special flights to London, Paris and Frankfurt, from where passengers can easily head to other destinations.

Thousands of passengers were stranded at Suvarnabhumi Airport on Wednesday night, as they had not been given advance notice of the cancellations. Some only learned their flight had been cancelled when they showed up at the check-in counter.

Officials were worried if it could be a PR disaster for THAI with passengers complaining about the lack of communication about the situation.

It will take about three days to clear Suvarnabhumi of stranded passengers, said Thera Buasri, director of the Airport Authority of Thailand’s Ground Service Control.

As for flights to Pakistan, THAI re-routed its TG507 and TG508 flights yesterday by flying directly to and from Muscat and not stopping over in Karachi. The Bangkok-Lahore-Bangkok flights on TG345 and TG346 yesterday were also cancelled.

In a related development, Auramon Supthaweethum, director-general of the Commerce Ministry’s Department of Trade Negotiations, said talks on a Thailand-Pakistan free trade agreement (FTA) will not be affected by the India-Pakistan conflict.

The Kashmir border crisis between the two countries recently resulted in both countries claiming to have shot down each other’s jets and an Indian pilot being captured by Pakistan. India has since demanded the safe return of the pilot, AFP reported.

Thailand has an FTA with India, and a pact with Pakistan has been in the pipeline since 2015. “Up to 99 per cent of the FTA chapters have already been negotiated, and we believe the pact will be concluded and enacted by the end of 2020,” Auramon said.

She added that the FTA negotiations with Pakistan had been delayed due to its general elections, which took place in July. She also noted that negotiations between the two countries would resume this year as a video conference.

“The remaining issue that needs to be discussed is the level of market access in goods that both sides will offer,” she explained.

Banjongjitt Angsusingh, director-general at the ministry’s Department of International Trade Promotion, said the impacts of the Kashmir conflict are still unclear, but if there were to be any negative impacts on Thai trade, they would only be for the short term.

Of the total trade value, Thailand exports Bt47.411 billion and imports Bt6.634 billion worth of goods, giving the Kingdom a trade surplus of Bt40.776 billion, the Commerce Ministry said.