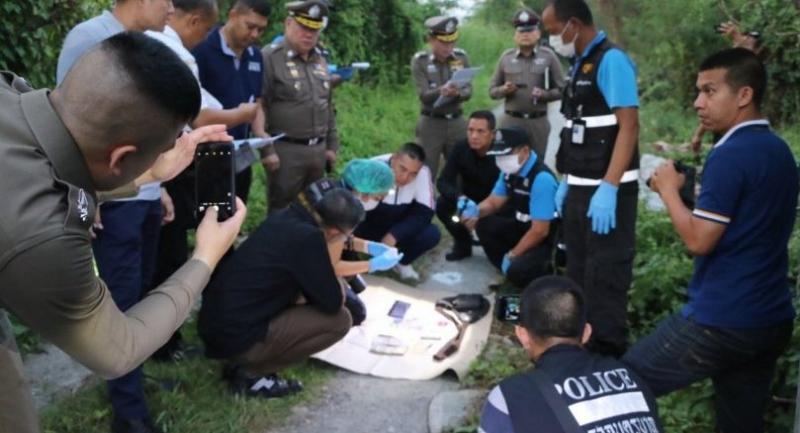 Police shot dead one of the two alleged perpetrators of an armoured truck robbery in Bangkok early Monday morning. He was apparently resisting arrest at the time. Police said Thakdanai Niawrungjai, 27, was gunned down next to a field of tall weeds in Soi Thawee Wattana 1 in Nong Khang Plue subdistrict at about 4.30am.

He was accused of collaborating with Jirayus Suanmi, 19, of robbing a BRINKS money truck of Bt7.2 million outside the Big C Extra shopping mall on Phetkasem Road in Bangkok's Nong Khaem district on February 23. Jirayus was arrested on February 27.

Police investigators knew that the elusive suspect was hiding in areas along Phutthamonthon 3 and 4 roads and learned from an informant that Thakdanai was due to meet friends at the snooker hall in front of Soi Thawee Wattana 1 late Sunday night.

When police rushed to the snooker hall to arrest him, he fled on a motorcycle inside the soi, heading to Phuttamonthon 4 road. Police said that as the officers approached during the chase, the suspect ditched his motorcycle in the middle of the soi and was about to flee into the tall grass.

Police claimed Thakdanai pulled out his pistol and opened fire so the officers returned fire and hit him twice in his chest, killing him immediately. Police found Bt300,000 in cash in a bag hidden under the pillion seat of his bike.

The body was sent for an autopsy at the Police Hospital. Police said the two robbers had apparently prepared well for the robbery as they took just 10 seconds to grab the cash from the money truck and fled on their motorcycle.

The two robbers arrived on their motorcycle just as the driver of the money truck and his helper came out of the shopping mall with Bt7.27 million cash in two bags. They were carrying the cash from a Siam Commercial Bank branch and were about to load it into the truck when the two robbers struck. The pillion rider fired a gunshot into the air, causing one worker to run away, and the pillion rider forced another worker to throw him the moneybags.