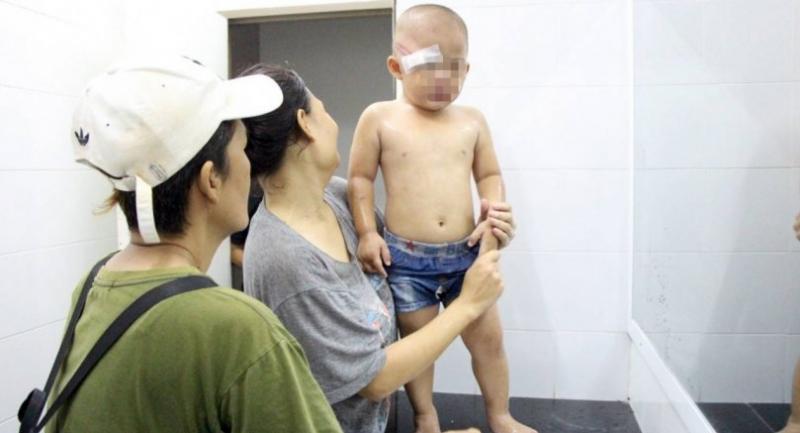 A POLICE volunteer who wounded a two-year-old boy as his parents tried to flee a traffic checkpoint in Chon Buri province has been charged with assault and suspended from duty.

The boy’s parents say they intend to take action to make sure the charge is upgraded and one legal expert has claimed the circumstances appear to warrant the man being charged with attempted murder.

The boy’s mother said the volunteer did not see the boy sitting between her and her husband on their motorcycle when he accosted them for making a U-turn upon seeing the checkpoint in Soi Khao Talo, South Pattaya.

He struck the toddler on the head, knocking him unconscious and opening a 10-centimetre wound that required three stitches.

The boy repeatedly vomited afterwards, indicating a concussion, and was found to have bleeding on the brain.

His mother, 25-year-old Kalaya Tomklang, said she would file a complaint with police.

“We were just avoiding the checkpoint so we wouldn’t have to pay a fine,” she said in tears. “Is that so serious a crime that you have to overreact like that? Now I’m just worried about my son’s health. He’s my only child. I want justice for him.”

The incident went public when a person who met the couple at Bang Lamung Hospital posted the details on Facebook.

Police yesterday identified the volunteer in question as Jakkapop Boonrod and summoned him at 2pm to give his side of the story, but he didn’t show up.

Nong Prue deputy superintendent Pol Lt-Colonel Krit Masook said he had visited the hospital to check on the boy’s condition earlier in the day.

He said the boy’s CT-Scan had cleared him of brain injury but doctors advised he needed to rest until he makes a full recovery.

He said he had assured the family that police would cover all their medical expenses and would ensure that justice prevailed.

Krit revealed that Jakkapop had initially been charged with assault – but it might be upgraded to a more serious charge if police inquiries showed that was warranted.

Police said Jakkapop, who had served as a police volunteer for nearly 10 years, was saddened by what had happened but still insisted that he hadn’t hit the toddler with a baton, as the family claimed, but just used a long piece of wood to block their way.

However, he said the toddler’s father was riding fast and he swerved to avoid hitting the piece of wood, so he quickly pulled it away, causing it to hit the toddler’s head.

Police have already suspended Jakkapop from duty and may bar him from any further police volunteer work in future. Meanwhile, Thai lawyer Decha Kittiwittayanan – who is famous for his Facebook page called “Thanai Klaitook” (trans. problem-solving lawyer) (facebook.com/dechalaw/) where he gives out legal advice – yesterday said the volunteer’s action could be construed as attempted murder within the |law.

The use of a weapon, having it land on someone’s head and the severity of the blow indicated that this may be considered an attempted murder because such an action could be perceived as having the possible consequence of the victim’s death, he explained.

The police volunteer may therefore face the charge of attempted murder – an offence punishable by two-thirds of whatever prison sentence an offence would merit when the conviction was for murder.

Decha said police volunteers were regarded as normal citizens who had no authority to make any arrest.