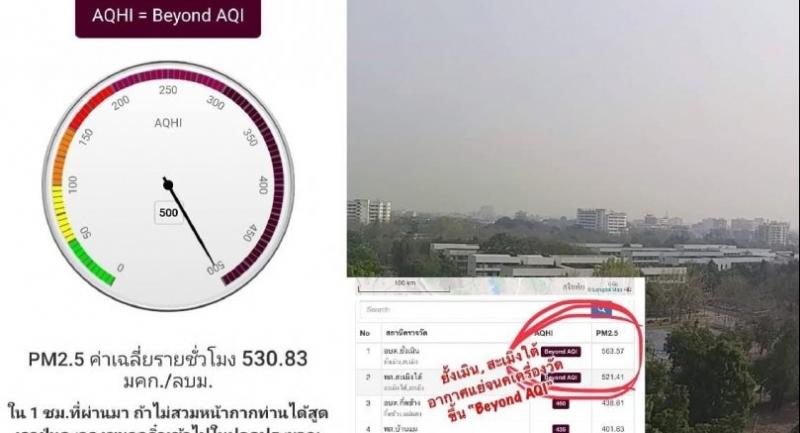 The "DustBoy" showed that as of 11am, Tambon Yang Mern and Tambon Samoeng Tai in Samoeng district cited the PM2.5 levels of 563.57 mcg and 521.41 mcg while both flashing the alarming "Beyond AQI" message.

Northern residents suffered increased air pollution on Friday as many areas had dangerous levels of tiny particulate dust, fueled by multiple forest fires in many parts of the region and in neighbouring countries.

The Pollution Control Department (PCD) at 11am, put the 24-hour average of PM2.5 – airborne particulates 2.5 microns or less in diameter – between 27 and 177 micrograms per cubic metre of air in nine northern provinces. The "DustBoy" showed that as of 11am, Tambon Yang Mern and Tambon Samoeng Tai in Samoeng district cited the PM2.5 levels of 563.57 mcg and 521.41 mcg while both flashing the alarming "Beyond AQI" message. Chiang Mai proceeded with haze-control measures including strictly enforcing the outdoor burning ban, tackling forest fires - where Chiang Mai as of 2.54am had 131 hot spots - and procuring another 50,000 face masks for distribution, in addition to the 600,000 face masks that were previously handed out, said deputy provincial governor Khomsan Suwan-ampa. Officials raised people's awareness and equipped them with health information while a "Safety Zone" with air-purifying devices was set at the International Exhibition and Convention Centre in Muang district to support up to 1,000 people, he said.

A seminar will be held on April 4 for officials from all nine northern haze-affected provinces to exchange ideas and co-ordinate in haze-tackling, he added.

In Phayao's Muang district where the 24-hour average of PM2.5 was cited at 65 mcg, district chief Suwit Suriyawong instructed forest firefighting staff to put out hot spots in tambon Mae Na Rua and tambon Mae Ka - the latter of which damaged 50 rais of forestland before it was extinguished.

In Mae Hon Son's Muang district, despite the authority's declaration to close off forestland days ago, a forest fire occurred at 3.30am near the entrance to Wat Phra That Doi Kongmu but officials put it out within an hour.

Another fire then took place in forest along the Highway 108 in tambon Huai Pong, damaging internet cables, resulting in the lost signal in parts of the city for the fifth time this month.