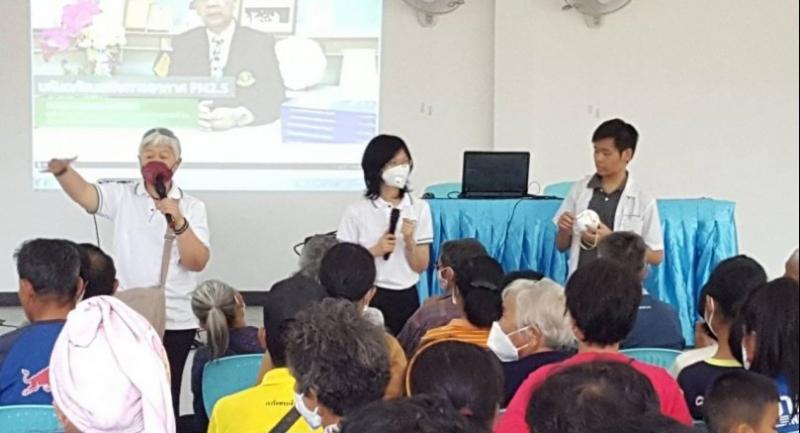 Residents get free health checks in Yangmoen, Chiang Mai, as part of the Clean Room initiative launched by Chiang Mai University (CMU), Suan Dok Hospital Foundation and the Clean Air for All group to build safe refuges from smog in the province.

SINCE THE air in entire villages or towns cannot be purified in the face of the raging smog crisis in the North, safety zones have been proposed as a way of protecting the most vulnerable people. The idea incorporates “Clean Rooms” where pollutants are filtered out, ensuring the air inside is safe to breathe.

This past week, a joint team from Chiang Mai University (CMU), Suan Dok Hospital Foundation and Clean Air for All group has visited remote corners of Chiang Mai province, where air pollution has soared to immeasurable levels, to work on the Clean Room initiative.

Tambon Yangmoen in Samoeng district was the first target area after the Air Quality Index (AQI) rose above 500 this month – the highest level the AQI can record. A score of between 401 and 500 indicates air pollution levels so hazardous that no one should venture outdoors.

“We need to reach out to locals there to provide guidance and ease their problems,” said Dr Khuanchai Supparatpinyo, who heads the CMU Research Institute for Health Sciences. He said the situation in Yangmoen was serious as the amount of hazardous PM2.5 particulate had exceeded 500 micrograms per cubic metre of air – 10 times the national safe limit of 50 micrograms.

The World Health Organisation, which describes PM2.5 as carcinogenic and links it to several other health problems, sets the safe level at half that of Thailand.

On April 7, the team from the CMU and its allies handed out face masks to people living in Yangmoen and offered free health checks. The team also turned the dust-free room at Samoeng Hospital into a Clean Room. Under the team’s initiative, do-it-yourself air purifiers, fans and air filters are used to help build a Clean Room.

The team also showed locals how to set up five Clean Rooms across Yangmoen and provided related equipment.

Then on April 11, the team set up 11 Clean Rooms in Chiang Mai’s Wiang Haeng district, which has also suffered severe air pollution.

“We will focus on creating Clean Rooms for nurseries in rural areas of Chiang Mai,” Kwanchai said. “Nurseries are where small children – whose brains are sensitive to haze – spend most of their time.”

In Yangmoen, 24 kids aged two to five have since enjoyed the benefit of having a Clean Room equipped with air purifiers since April 7. Teacher Chanakan Intanet said she and fellow teachers, as well as the pupils can feel the contrast to the visibly dusty air outside.

“It’s such a huge difference. An air-pollution detector shows the room’s particle dust level drops to just 19mcg – while the outside shows a reading of over 100mcg,” she said. The children were dropped off at 7am and collected by 4.30pm, with the eight hours being long enough for the Clean Room to make a difference. The pupils suffer less respiratory irritation, coughing and find it easier to sleep, Chanakan said.

This year’s smog crisis has been the gravest in the region’s recent history, highlighting the serious need to protect people before their health crumbles under the toxic load.

Assoc Professor Dr Siwaporn Chankrachang, an adviser to the CMU president and chief of CMU doctors for the Yangmoen initiative, said most people in remote areas were not aware of the impact of the smog, but knew it was related to agricultural fires.

“Now that we have informed them of the impact, we believe they will try to prevent forest fires next year,” she said.

Siwaporn said her team also intends to study the health of long-time residents in smog-affected areas.

“We will focus on children, people suffering from lung, heart, brain and allergy problems, plus the health of forest-fire fighters,” she said. Siwaporn and CMU doctors also provided health checks for tambon Yangmoen residents, most of whom suffer from respiratory problems.

They also had a chance to talk with members of the “Sua Fai” forest-fire response team, most of whom weren’t aware of the impact of smog and initially wear face masks while battling the fire.

After the talk, many fire responders, now worried of longer-term health impacts, also sought medical check-ups at the hospital, she said.

“This year, we first focused on hospitals that have more than 5,000 patients with lung, heart and asthma problems,” he said.

Next year, Chiang Mai authorities are planning to ensure that all of its more than 200 tambon-level hospitals have Clean Rooms in place.

“We hope at least pregnant women, young children and patients who are sensitive to smog will be able to take shelter in the Clean Room whenever air monitoring shows the PM2.5 levels in their area soars above 50mcg per cubic metre of air,” Chaicharn said.

In his view, exposure to PM2.5 can directly shorten people’s lives.

His opinion is in line with the State of Global Air’s 2019 report that a child born today would lose an average 20 months of its life if exposed to chronic indoor or outdoor air pollution.