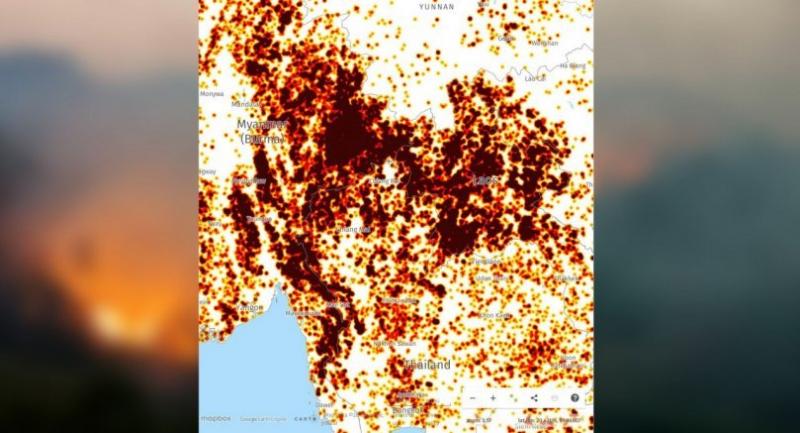 A STRONGER political will is required to take action against monoculture corn cultivation both inside Thailand and in neighbouring countries, or the transboundary haze problem will never be solved, environmental experts said, as Chiang Rai’s Mae Sai district continues to choke under hazardous smog.

Greenpeace said the month-long hazardous air pollution in Mae Sai should serve as a wake-up call for the authorities and policymakers in the Mekong sub-region, and they should take the problem seriously and work together to solve it. Tighter regulations are required to stop the transnational food industry from expanding unsustainable monoculture corn farming, Greenpeace said, adding that the supply chain of the food industry should be given more sustainable sources.

According to the Pollution Control Department (PCD), the northernmost city of Mae Sai has been enveloped with extremely high levels of PM2.5 – or fine particulate matter that is less than 2.5 micrometres in diameter – for every single day in the past month.

PCD said that the PM2.5 level has not for a single day been below 90 micrograms per cubic metre, adding that the 30-day average stood at 169mcg and the highest level of PM2.5 was 452mcg.

These PM2.5 levels are dangerously high, considering that the PM2.5 safe limit in Thailand is 50mcg, while that of the World Health Organisation is 25mcg.

Tara Buakamsri, country director for Greenpeace Thailand, said the smog problem in the North, especially in Mae Sai, can be considered a public health emergency as PM2.5 in these areas has been beyond the safe level for a very long time. Hence, Tara said, it is time for the authorities to be serious about tackling this problem swiftly.

He added that information at hand indicates that the prolonged smog in Mae Sai has more to do with transboundary pollution, because even though outdoor fires in Chiang Rai province have dropped in number, the air quality remains hazardous, as fine dust continues drifting across the border from neighbouring countries.

A hotspot image from globalforestwatch.org confirmed this notion, as it showed that Mae Sai district was surrounded from all directions by dense hotspots in Myanmar, Laos and neighbouring provinces, Tara said. “The smog crisis in Mae Sai vividly reflects our government’s failure to effectively implement the Asean Transboundary Haze-Free Roadmap and collaborate with neighbouring countries in the Mekong sub-region to control |wildfires and outdoor burning,” he said.

Many academics and experts, including Tara, believe that monoculture maize farming is one of the primary factors behind the seasonal smog in this part of the Mekong sub-region.

Farmers in Thailand, Myanmar and Laos have been encroaching on forests to expand their farms for contracted corn farming, and they also use the slash-and-burn technique to get rid of scrub after the February to April harvesting season is over.

A recent report by Prachachat Turakij newspaper said now that most of the arable land in Thailand was taken over by corn fields, the monoculture maize farming has spilled over to Myanmar and Laos through the Ayeyawady-Chao Phraya-Mekong Economic Cooperation Strategy.

The report added that corn production in Myanmar is expected to rise by 6 per cent this year due to higher demand from China and Thailand, with annual maize production expected to reach 1 million tonnes in Myanmar, up from the current capacity of 850,000 tonnes.

Hence, Tara said, the smog problem in the North is very complex as it involves international politics and trade, and is also related to many influential players in the transnational food industry. That’s why, he said, the government needs to have a strong political will to efficiently handle this gigantic problem.

“We can learn from Singapore, which has effectively solved the transboundary haze by enforcing the Transboundary Haze Pollution Act to deal with problematic practices by transnational companies that encourage the burning of forests and peatland in Indonesia to expand monoculture palm farming,” he said.

“Nevertheless, we have strong academic and public sectors that are ready to cooperate with the authorities to sustainably tackle the smog problem. However, I don’t think Thailand has as strong a political will as Singapore to effectively tackle the transboundary haze problem at its root by enforcing tighter regulations on the entire food industry production chain.”