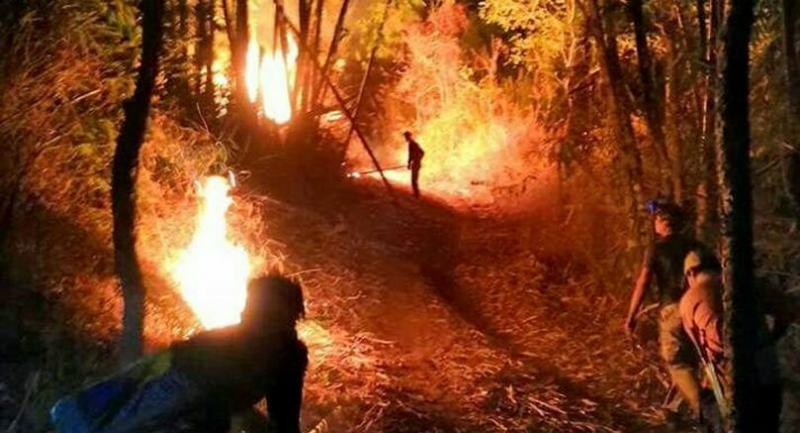 THE HUGE FIRE, which this week turned Doi Jorakhe into an inferno and destroyed more than 1,000 rai (160 hectares) of forestland, has been contained with most hot spots put out, deputy governor Narong Rojjanasothorn said yesterday.

However, the battles against wildfires will continue elsewhere in Chiang Rai, which still suffers from 380 hotspots, Narong said after meeting with the Doi Jorakhe special coordination centre for fighting forest fires, located at Wat Pateung in Mae Chan district.

Forest fires continued to contribute to dangerous levels of PM2.5 – airborne particulates 2.5 microns or less in diameter – in many parts of the upper North. The Pollution Control Department (PCD) at 9am put the 24-hour average of PM2.5 at 159 micrograms per cubic metre of air in tambon Wiang of Muang Chiang Rai, and at 170mcg in tambon Wiang Phang Kham in Mae Sai district.

As of press time, three of the five fires on Doi Jorakhe had been totally put out, while two other hot spots – forestland near a Mae Chan monastery and the “Pha Toob” forestland in the Taad Thong Waterfall area – were being handled and firebreaks being built to protect communities, Narong said.

Narong also called on people to watch out for those who were sparking the forest fire, so they can be punished. He also noted that Chiang Rai had not experienced extensive forest fires caused by human acts in the past two years. Paying tribute to the hard work of some 600 officials and volunteers who joined the Doi Jorakhe battle, he also noted that two choppers had carried nearly 70,000 litres of water in more than 80 flights to douse flames in hard-to-reach areas.

The Doi Jorakhe wildfire caught public attention as photos of the fire were widely shared on Thai social media. His Majesty the King had graciously seen to it that a mobile kitchen was dispatched from the 37th Military Circle to support the Doi Jorakhe forest firefighters, while members of the public also delivered drinking water and tools to aid the effort.

Chiang Rai still has 380 hotspots to douse, the deputy governor noted. They included Doi Kad Phee in tambon Wawi of Mae Suay district that had started on Tuesday night and spread to the three nearby tambons of Mae Suay, Mae Prik and Sri Tham.

In a related development, a 46-year-old man was arrested on Tuesday afternoon in tambon Por of Wiang Kaen district for alleged setting fire to the scrub on his farmland, which spread through 5 rai of forestland.