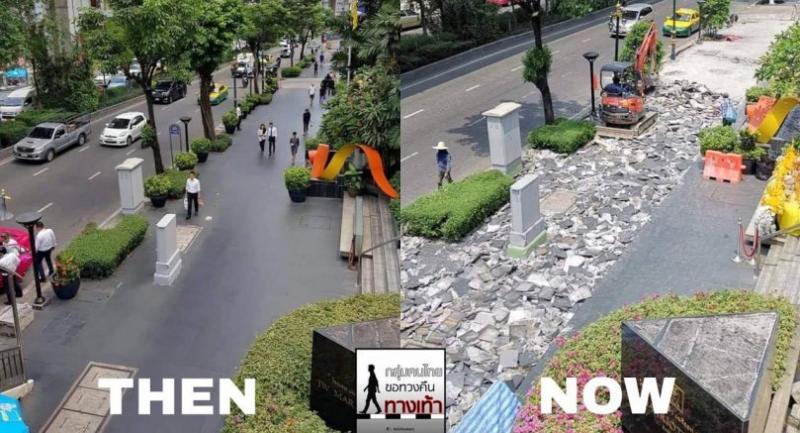 A social-media campaigner and his supporters on Sunday continued to slam the Bangkok Metropolitan Administration (BMA) over the demolition of privately built “good and solid” footpath in the Nana area.

The city had already defended the demolition as being necessary to maintain a consistent appearance along the footpath consistent and insisting its replacement would be “up to standard”.

“The BMA standard is what – uneven tiles, with several tiles later easily dislodged and waiting to splash the water trapped underneath on pedestrians” was the campaigner’s sarcastic response. He’s the administrator of the AntiHawkers Facebook page.

He cited a newspaper report in which a deputy director at the BMA Public Works Department explains that the demolition was part of a bid to improve the kilometre-long footpath from the Nana railway tracks to the Asoke intersection. The work was needed because power lines had recently been installed underground and the footpath’s appearance had to be consistent all the way.

“I’m not sure how strong the privately laid footpath is, but the BMA’s replacement will be as per the standard,” the official was quoted as saying. He added that the new footpath would be easily repaired if the concrete were cracked.

“Why the demolition when it’s not broken, despite apparently having endured high traffic (both from pedestrians and motorcycles) for a long time” he asked in an online post.

“The adherence to a bureaucratic regulation – in which a state agency must use up its entire annual budget [for fear to budget reductions next time] – should be scrapped. Because it leads to the unnecessary spending of taxpayers’ money on things that aren’t useful,” he said in the post, which received nearly 800 reactions within hours.

“It can also lead to corruption.”