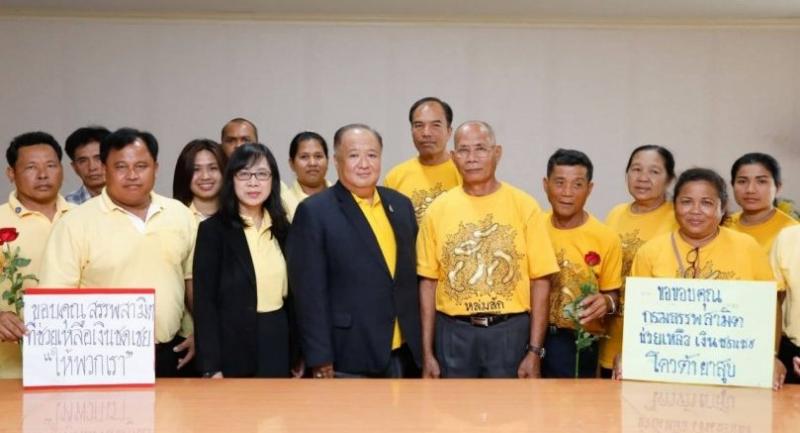 Tobacco farmers submit a letter of thanks at the Finance Ministry last week following its decision to postpone to next year another excise-tax hike on cigarettes.

A network of tobacco farmers has welcomed the government’s decision to postpone an excise-tax hike on cigarettes until September next year.

The Cabinet last week delayed the 40-per-cent single rate for cigarettes that had been set to come into force on October 1 this year.

But another year on, the new tax structure will see the tax jump 40 per cent on a pack of cigarettes priced at Bt60 or less – matching the rate applied to cigarettes priced above Bt60. The retail price will also increase accordingly.

Songkran Pakdeejit, president of the Burley Tobacco Farmers Association of Phetchabun, said farmers were already struggling because the tax rate has risen every year for the past three or four years.

Tax increases have reduced the amount of tobacco that the state-run Thailand Tobacco Monopoly buys from farmers by almost 50 per cent, Songkran said, and collectively cost them around Bt2 billion in lost income.

“We were very worried about our future [due to the next planned hike],” he said. “We don’t know if we can hang on to our livelihoods or be able to plant another crop.

“But the government has decided to postpone this one and we’re glad we haven’t been abandoned. We believe the labour situation and the economy in tobacco-growing areas will improve,” Songkran said.

The network has also called on the Excise Tax Department to consider more gradual increase in the tax rate or perhaps a rise of 5 per cent every two years.

Cigarettes are liable to taxation in terms of both volume and value, regardless of price, under the current excise-tax structure.

The tax based on value comes in two rates – 20 per cent of the suggested retail price when sold for less than Bt60 per pack and 40 per cent above.

Philip Morris Trading (Thailand), a leading cigarette importer, has also expressed appreciation for the government’s decision and thanked the Ministry of Finance for considering the potential impacts the tax increase would have on farmers and the industry, said Gerald Margolis, its managing director.

The industry has faced both significant market decline and a rise in illicit trade since the current tax rates came into effect in September 2017, he said.

Postponement of the 40-per-cent single rate will alleviate these problems and give Thailand’s 40,000 growers, legitimate manufacturers, wholesalers and retailers more time to adjust, Margolis said.

“We look forward to working with the government and relevant agencies to find an appropriate longer-term solution that will benefit the industry as a whole, particularly tobacco growers,” he said.