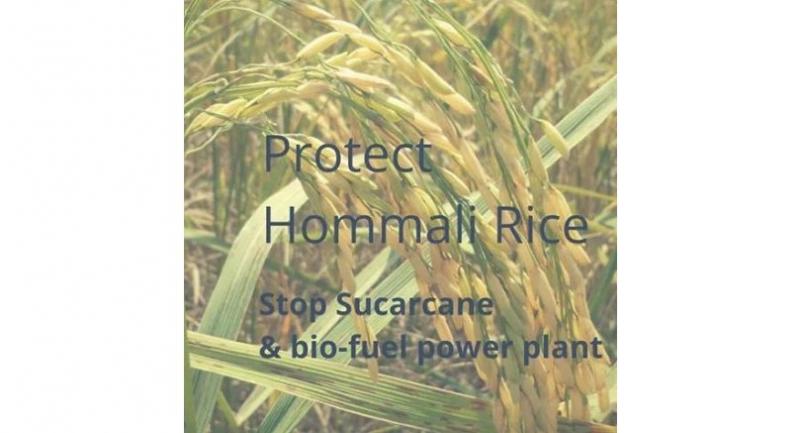 THE PROJECT to set up a sugar factory and a connected bagasse-fuelled power plant is posing a threat to one of the world’s renowned jasmine rice varieties – the Thung Kula Rong Hai – according to locals living in the Pathumrat district of Roi Et province.

Raising concerns about the project, locals have now rallied behind the Pathumrat Conservation Group.

“We are against the project,” the group’s core member Prayom Sa-ngiam-rat said, after submitting the signatures of more than 2,000 locals to the Roi Et governor to show the extent of local opposition.

The move was designed to counter information gathered from participants at a public-consultation forum in Pathumrat district last Thursday.

Prayom said there were many irregularities about how the forum was held.

“First of all, the forum was organised at a spot outside the 5km radius from the planned project site,” he said, insinuating that the participants there were not exactly locals.

In addition, he said he had heard that each participant was paid Bt300 to join the forum.

“In my opinion, it looks a lot like participants are paid to express support for the project,” Prayom said. This factory will process about 24,000 tonnes of sugarcane a day. Accompanying this facility is an 80-megwatt power plant that will be fuelled by bagasse. “It will be the biggest industrial operation in Thung Kula Ronghai,” the club reported.

The Thung Kula development project covers 1.27 million rai of land in five provinces. Of this, 986,807 rai are located in Roi Et. About 160,000 rai of Thung Kula area are in Roi Et’s Pathumrat district.

The Thung Kula area has been promoted as the zone for growing jasmine rice. Now, rice from this zone is famous across the world. Last year, exports of such rice – known as Thung Kula Ronghai – were worth billions of baht.

Speaking based on information on hand, the Tambon None Sawan Conservation Club said on its Facebook page that Banpong Sugar Company Limited had already bought more than 500 rai of land in Tambon None Sawan. During the past four years, it has seriously promoted sugarcane plantations in the area. In early 2017, it hired a consulting firm to conduct an environmental impact assessment for its big but controversial project. According to the Tambon None Sawan Conservation Club, the consulting firm held a public forum on the project on August 28, 2018 and locals turned up to submit a letter of opposition.

Then on February 2 this year, the consulting firm unsuccessfully tried to hold a second public forum. No locals turned up to attend the event.

The consulting firm made another effort by holding the latest public forum on May 16 at a spot outside the 5km radius of the project’s site. Banpong Sugar Company Limited was allowed to pay participants as the amount was considered as reimbursement for participants’ time and travel expenses.

Tambon None Sawan Conservation Club complained about this, and even headed to Bangkok to file complaints with relevant authorities.

The club hopes that at the very least, the next public forum on the project – which is scheduled to take place on Thursday – should be scrapped. Chainarong Sretthachau, a lecturer at the Mahasarakham University, disclosed that there were now nearly 30 projects to build both a sugar plant and a biomass plant at the same site in the country’s Northeast.

“This is a result of the current government’s policy to increase sugarcane plantations in the region without caring about possible adverse impacts,” he said.

Locals are worried that such large industrial operations will use lots of groundwater and local farmers will suffer. They also suspect that the power plant may consider using coal, if there are not enough bagasse for its power generation.

“We in fact should think about such industrial operations’ impacts on paddy fields,” Chainarong said.

He said the Thung Kula way of life was about people working in their paddy fields during the rainy season and herding their cattle during the dry season.

“If paddy fields in the area are replaced by sugarcane plantations, there will be no place for cattle. And very likely farmers will fall under the control of contract farming,” he warned.

He was also worried that the Thung Kula Ronghai rice would be at risk, when sugarcane plantations spread even to nearby areas.

Sugarcane growers, after all, are known to be heavy users of agrochemicals. Moreover, they are also widely blamed for agricultural fires – which are lit to clear weeds to pave way for easy harvesting.

“Ever since the sugarcane plantations started to seriously spread in the Northeast, the PM2.5 particulate matter has risen,” Chainarong lamented.

He said many northeastern provinces, just like Khon Kaen, had been struggling with the PM2.5 threat for several months each year.

In 2018, Thailand’s domestic sugar consumption stood at 2.8 million tonnes. The country, in the same year, exported 11 million tonnes of sugar.