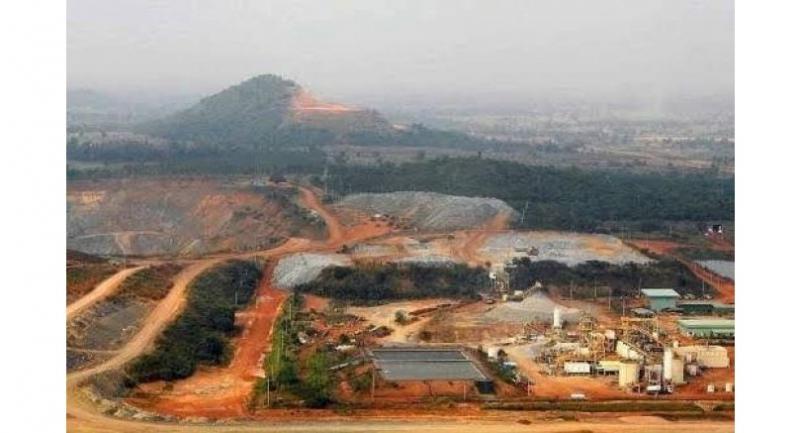 PEOPLE LIVING in the vicinity of the Akara Resources gold mine in Phichit province are complaining that they still have to put up with the contaminated environment, as neither the company nor the authorities have worked to clean up the heavy metals contamination from the gold mine leakage.

More than two years since the National Council for Peace and Order (NCPO) ordered the temporary closure of every gold mine in the Kingdom, including the Chatree gold mine, nothing has been done to clean up the environment, while the local people have to fend for themselves, as all assistance was stopped after the mine closure, said Thanyarat Sinthornthammathat, a leader of local gold mine opposition group.

Recent blood tests have shown that many local people in the affected areas around the gold mine, including she, have harmful levels of heavy metals in their bloodstream and more and more people are getting sick, Thanyarat said.

“Many local people around the gold mine still have to live in a hazardous environment, as both the gold mine company and the relevant agencies have done nothing to tackle the leakage of the gold mine’s TSF1 [the first tailing storage facility] and clean up the contamination in the environment,” she said.

“Therefore, the people are still exposed to the leaked heavy metals and cyanide in the environment around us and continue to get sick from these hazardous substances. Even I have been fainting occasionally for several months now.”

She said the doctors had diagnosed that she suffered from low blood pressure, but they could not find out the exact cause of the sickness.

She revealed that regular clean food and water distribution to the people in the affected areas had been completely stopped for more than two years already, so the people were forced to consume food and water from the contaminated areas.

“Our plea to the authorities to help us relocate from the affected areas of the gold mine pollution was also ignored. So, we have no choice but to continue living in this toxic contaminated environment,” she said.

Earlier last year, teams of experts formed under working groups of four ministries had come to the conclusion that the Chatree mine’s TSF1 was leaking and Akara Resources was required to fix the leak and ensure environmental restoration at the site.

“Right now, we already have to bear the heavy financial burden from the gold mine closure and we were forced to lay off most of our workers at the mine until only 36 workers remain.”