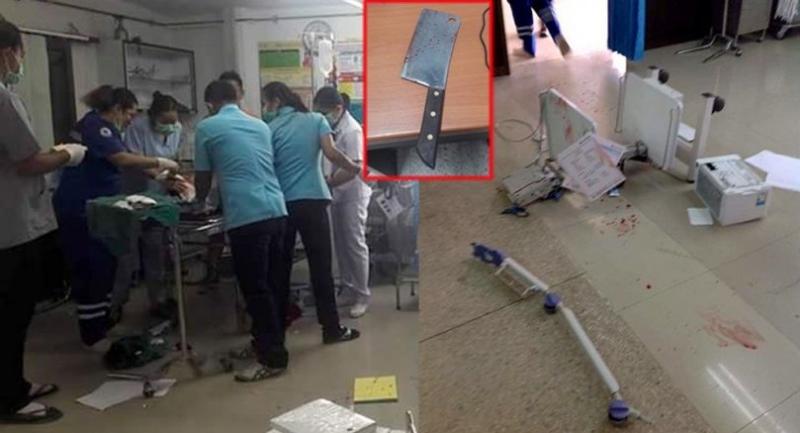 By NILA SINGKHIRI
THE NATION

POLICE YESTERDAY filed four criminal charges against an Ubon Ratchathani man who attacked a male rival with a cleaver while the latter was being treated for injuries in hospital.

The attack by Thanakrit Mungporn, 41, on his rival Preeda Doungphetch, 27, in the emergency ward of Lao Sua Goke District Hospital on Sunday damaged an electrocardiogram machine worth Bt225,000 but didn’t hurt any of the medical staff.

Preeda was hiding behind the equipment from his knife-wielding rival but sustained two cuts in the face and head – in addition to the head wound he received when he was hit by a broken bottle in a previous brawl with Thanakrit at a local fair earlier in the day.

After the hospital attack, Thanakrit waited for police in front of the ward. The senseless violence has caused a furore on social media.

Thanakrit reportedly confessed to the crime and acknowledged the four charges police filed against him: carrying the knife as a weapon to a public place without a sound reason, intrusion of a state office, damaging state property and attempted murder.

Apart from allegedly confessing his guilt, he also expressed his willingness to pay for the machine to be fixed.

Police then escorted him to perform a re-enactment of the crime, under the observation of hospital director Dr Thammaporn Pratpan.

Thanakrit performed a “wai” as an apology to Thammaporn and expressed remorse for what he had done.

Thammaporn said what happened had really shaken her staff. Also, the hospital only has two such expensive machines, so this episode had left them with only one machine, which also wasn’t working properly.

Happily, a kind-hearted person had offered to donate one such machine to replace the damaged one, she added.

Ubon Ratchathani deputy commander Pol Colonel Thammachak Khongmongkol said that Thanakrit had been one of the organisers of the fair and the trouble started when he tried to stop Preeda’s group from fighting with a rival group of youngsters from another village.

He picked up a microphone and made an announcement urging Preeda’s group, who were residents of the same Phon Muang village as him, to stop fighting and added that anyone who wanted to fight should pick on him instead.

When he got off the stage he was kicked in the torso from behind by Preeda, resulting in a brawl between Thanakrit’s group and Preeda’s group, after which Preeda was taken to hospital with a head wound.

Thanakrit, still furious, then followed in the pick-up truck to the |hospital, where he allegedly attacked Preeda.

A total of 51 violent incidents took place at state hospitals between 2012 and the first four months of 2019, causing a total of 10 deaths and leaving 56 injured.

The Public Health Ministry earlier this month proposed solutions to boost security at hospitals, including a review of emergency wards’ layouts and installation of double doors with controlled access, additional CCTV cameras as well as a life insurance coverage for medical personnel at the emergency wards.