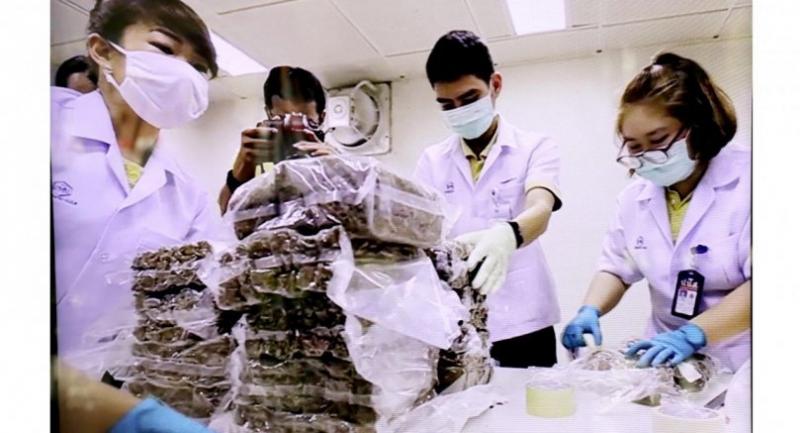 A photo taken of a video clip, presented during a press conference at the Office of the Narcotics Control Board in Bangkok yesterday show lab staff members handle packets of marijuana for contamination testings.

THE AUTHORITIES say they plan to use seven kilograms of marijuana seized during drug busts to make medicinal oil and use two tonnes for medical research.

The Office of the Narcotics Control Board (ONCB) secretary-general Niyom Termsrisuk told the press on Thursday that some 22 tonnes of marijuana had been seized in 43 drug busts between October 2018 and March this year. So far 18 tonnes had been subjected to the Food and Drug Administration’s contamination tests, which showed that only two tonnes could be used in research. Another seven kilograms could be made into marijuana oil right away, so the ONCB could send it to three hospitals and eight universities by mid-June.

The other 16 tonnes were found to be useless as they were heavily contaminated with metals like cadmium and by pesticide, and so they would be destroyed, Niyom said. Niyom admitted that the small amount of usable marijuana had raised questions about whether it is worth using time and resources to test seized drugs.

Affirming that marijuana was still in Thailand’s Category 5 narcotics list, Niyom warned people not to use uncertified marijuana extract from the black market to abide by the law and prevent harm.

The Department of Medical Sciences’ deputy director-general Dr Pichet Banyat said those who legally had marijuana in their possession for medical purposes and wished to check it for chemical and metal contamination can submit the sample for testing. The test, however, was rather costly at Bt2,000-Bt12,000, Pichet said.