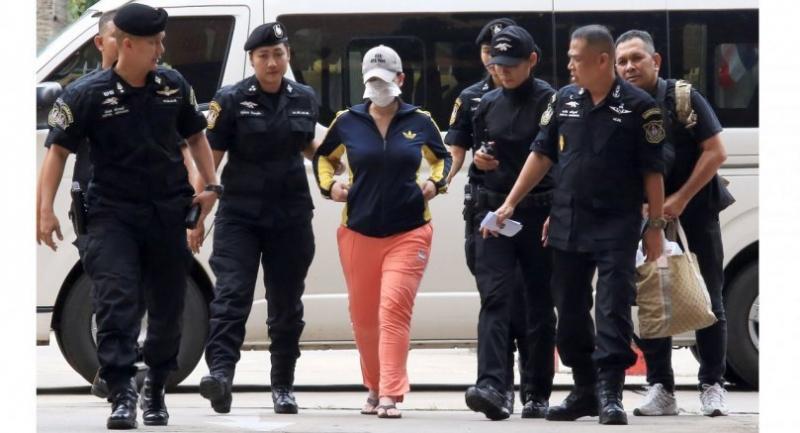 FORMER POP STAR Prissana or Priscilla “Pookie” Gemelli, who was arrested with her husband for allegedly selling 5.17 kilograms of ketamine to a Taiwanese man, has allegedly admitted to taking drugs and getting involved in her husband’s alleged drug trafficking, a senior police officer said yesterday. Pol Lt-General Chinnapat Sarasin, commissioner of the Narcotics Suppression Bureau, said the couple claimed they had received the drugs from a supplier in Bangkok’s Chokchai 4 area and that this was the first time ever they have delivered drugs.

Chinnapat said Chonlawit had served a jail sentence for drug trafficking and been released in 2006, though Prissana has no previous criminal record. The couple is now facing charges of conspiring to acquire drugs for resale, while police will also check to see if they had produced the drugs.

Chinnapat added that investigators have not found any links to the entertainment industry so far. Prissana and her husband were detained after drug-suppression police tracked down Taiwanese suspect Hung Cheng Yi, 28, at the Gold Airport Suite Hotel in Lat Krabang on Monday afternoon. Police had received a tip-off that Hung was flying to Thailand to buy drugs, and upon checking his room they found the ketamine hidden in 39 ashtrays packed in four cardboard boxes ready for shipment to Taiwan.

Hung named Chonlawit and Prissana as his suppliers, leading police to search Prissana’s home in the Terrace housing estate in Bang Khen district, where the couple was arrested along with 98.3 grams of crystal meth, eight meth pills, 10 ecstasy pills, 4 grams of ketamine, and 40g of marijuana.

They also found some chemicals and equipment believed to be used to produce drugs. Police also seized the couple’s assets for inspection.

Meanwhile, Chalermkiat said the drugs seized from the couple and the Taiwanese suspect had a street value over Bt10 million.

Initial investigation also revealed that Chonlawit had rented a hotel room next to Hung’s room to deliver the ketamine, Chalermkiat said. This is not the first time that a Thai pop star has had their life and future destroyed by getting involved in illicit drugs.

Former singer Worayos “Pat Power Pat” was arrested in 2004 with 2,989 ecstasy pills, 5 grams of marijuana and four tubes of ketamine and sentenced the following year to 50 years in jail and fined Bt1 million. At the time of arrest, he was 24 and is still behind bars.

She was sentenced to eight years and one month in jail and fined Bt340,000 for possessing illegal drugs with the intent to sell, while the boyfriend received a jail term of 33 years and four months plus a Bt800,000 fine. Pornpas was released in 2013.