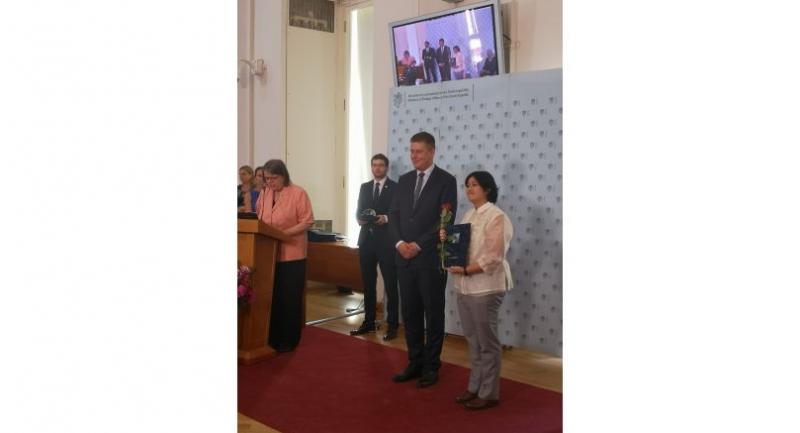 Assistant Professor Verita Sriratana of the Faculty of Arts at Chulalongkorn University has become the first Thai citizen to be named a Gratias Agit Laureate in the Czech Republic.

A total of 15 individuals and one organisation received the Gratias Agit Award from the Czech Foreign Minister Tomas Petricek at the ceremony on June 14 at the Czernin Palace in Prague.

This year, Verita is the youngest of 16 laureates to receive this award.

The Gratias Agit Award, formerly “Jan Masaryk Gratias Agit Award, has been presented by the Minister of Foreign Affairs for the promotion of the good name of the Czech Republic abroad since 1997 in appreciation of prominent personalities and organisations developing activities in nongovernmental fields.

Verita, a PhD holder, is the director of the European Studies International Programme, Deputy Director of Academic Affairs at the Centre for European Studies as well as a lecturer of literary studies at the Department of English at Chulalongkorn University.

Verita was rewarded for her work on Czech culture, history, literature and politics. In addition, she also promotes the good name and raises awareness of the Czech Republic and the rest of Central Europe in Thailand.

Her contribution to teaching also includes presenting the Czech Republic and organising Czech arts and cultural activities at Thammasat, Chiang Mai and Kasetsart universities as well as the University of Sydney, Maria Curie-Skłodowska University and University of Zurich.

Her voluntary work promotes the Czech literature, translating Bohumil Hrabal’s Too Loud a Solitude or Svejk to Thai for the theatre.

She is researching in cooperation with Professor Milada Polišenská at the Academic Adviser at Anglo-American University in Prague.

Verita praised the extensive libraries in the architectural gem.