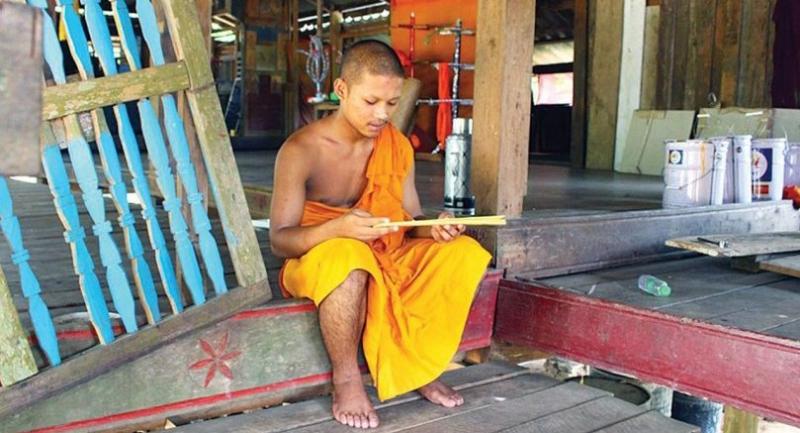 A monk studies a Buddhist manuscript |at Wat Singkhon in Myanmar’s Myeik province.

Forgotten by their homeland and unwelcome in Myanmar, ethnic Thais in Tanintharyi region call for help

FORGOTTEN BY their homeland, members of the Thai diaspora living in Myanmar’s Tanintharyi region are calling on their kin across the border for help, as they struggle to preserve their heritage and identity.

In the middle of a dense betel nut and fruit orchard lies Ban Singkhon – a small village of around 400 people. Many people here speak a southern Thai dialect, and lead their lives very much like the people in the South of Thailand. Yet, this village is on the other side of the Thai-Myanmar border on the Kra Isthmus, where their ancestors lived before the modern border was established. They appear to be living in a never-never-land – not recognised as Thai citizens and few actually holding Myanmar citizenship.

Life is relatively safe now, says Anan Pathipat, a 56-year-old community member. Just two decades ago, the people here were caught in a conflict between the Myanmar military and Karen armed groups. To protect themselves, they had to join the Myanmar army.

Now, Anan says, they face a new challenge – their cultural identity is fading away bit by bit as Myanmar settlers are slowly usurping their area.

“We have been here for as long as I remember. I was born and grew up here, the same as my father and grandfather. This has been home to Thai people for generations,” he said.

“Even though more than half of the original Thais chose to migrate to Thailand due to war, our community has managed to preserve its Thai identity. But now, we’re gradually being colonised by the Burmese as more and more of them settle down in our motherland.”

Also, he said, as an ethnic minority, they are treated unfairly by Myanmar authorities. That, combined with economic hardship, is driving more and more of them to Thailand for better paying jobs and a less troubled life.

“We are being alienated in our own home; our Singkhon village used to have 400 ethnic Thai families, but the number has dwindled to just 150, with half of the community now Burmese,” Anan said.

The situation is similar in other ethnic-Thai communities in the two former Thai provinces that make up Myanmar’s Tanintharyi region.

The abbot of Wat Singkhon temple, Phra Sa-nguan Papassaro, said the slow decline in the ethnic-Thai population has also resulted in the loss of culture.

“Since the children here have to study in Myanmar schools, they used to come to the temple to learn the Thai language and culture. However, as more and more Burmese monks are being set to Thai temples, there are very few places where children can learn Thai now,” Phra Sa-nguan explained.

Based on information from the Thai Community Foundation, many historical records confirm that Thai and Karen people originally populated the two southernmost provinces in Myanmar’s Tanintharyi region –Myeik and Kawthaung. However, these areas changed hands between Burma and Siam several times, until the neighbouring country finally took control at the end of the 19th century.

With war, oppression and economic hardship changing the proportion of ethnic groups in the region, the Burmese gradually replaced the Thais. Estimates put the number of Thais still residing in Myeik and Kawthaung at around 100,000.

Life here is difficult as the ethnic Thais still rely on age-old mixed farming methods, which do not generate enough funds.

“We are trying to make a living by selling fruit in Thailand, where we get a better price. But due to tough border regulations, we have no choice but to sell our products for very little locally,” Anan said. “We want to call on Thailand to ease the regulations so we can sell our goods in Thailand.”

He also said that Thais living in Myanmar are in desperate need for better schooling and healthcare, but since Myanmar authorities are ignoring them, he is hoping the Thai public will offer aid.

“All we need is to live in peace, retain our cultural identity and have a happy life – just like other people,” he said.