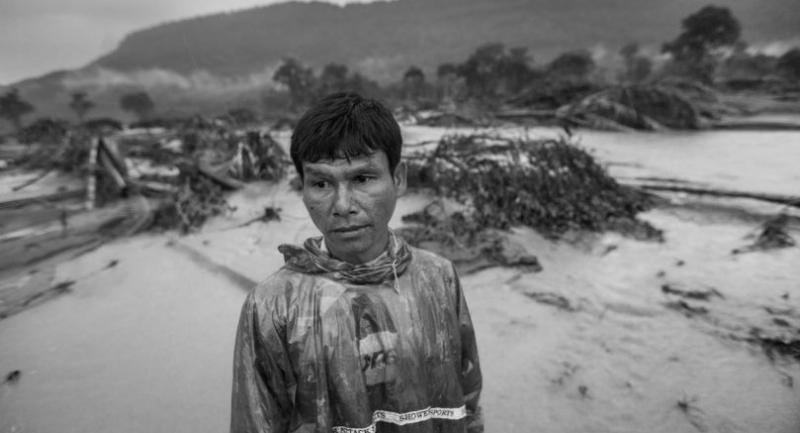 The collapse of the Xe Pian-Xe Namnoy dam in Laos left thousands homeless and the environment devastated. Photos courtesy of Roengrit Kongmuang .

Looking from the West to the East, the North to the South, large-scale development continues apace across Southeast Asia, leaving a toll on people_whether or not it is linked to ambitious plans proposed in Asean frameworks.

On June12, Cambodian villagers had travelled a long distance and across the border to Thai court to testify that a Thai sugar producer had illegally seized their land in Oddar Meanchay province where its subsidiary planned to cultivate sugarcane.

Transborder News reported that the court was asked to decide whether the complaints they shared with more than 700 other people constituted grounds for a class-action suit.

If so, the suit would be the first of its kind, spanning national boundaries in Southeast Asia.

In Laos, the partial collapse of the Xe Pian-Xe Namnoy Dam last year displaced hundreds of residents, yet work on the project continues, similar to the situation of the Mekong River, according to the non-profit organisations Mekong Butterfly and Mekong Watch.

Advocates of sustainable development agreed in the forums held during the just concluded Mekong-Asean Environmental Week (MAEW 2019) that countries in the region continue to pursue economic growth and integration while overlooking the harm done to people’s lives.

While Asean leaders hold their summit in Bangkok this weekend, the advocates – led by Project Sevana Southeast Asia – has held parallel forums to publicise the plight of people adversely affected by the relentless push for development.

“We want to let their voices and stories be heard,” said Premrudee Daoroung of SEVANA. “Asean has never looked deeply into the root causes of the problems that mega-projects cause for people.”

Shalmali Guttal of Focus on the Global South, a think-tank monitoring sustainable development and institutions’ roles in the region, said Asean’s chief interest is wealth. It thus gives priority to investors and to mega-projects in which the member states are often themselves investors.

It’s an approach that influences laws and institutions, which tend to favour investors over citizens and the environment.

Guttal cited the Investor State Dispute Settlement, a legal apparatus that she said weakens governments’ ability to protect people, the environment and public interests from encroachment by investors.

“If you look at all the agreements signed, as listed on the Asean website, you never see the term ‘people’. It’s like they don’t exist. They’re addressed as just ‘labourers’ and so on.”

Citizens’ rights are thus going unrecognised, Guttal and others concluded. The multiple cases in which no provision for reparations or state assistance are established extend to the Lao dam and the land conflict in Cambodia.

Witoon Permpongsacharoen of the Mekong Energy and Ecology Network (MeeNet) said it’s obvious that the paradigm about development in the region has never changed, citing the case of mega dam construction projects.

All that changes, he said, is the identities of the key players, such as financing institutions.

Such players seek to create an atmosphere in which investors feel confident they will reap rewards. Often this entails putting political infrastructure in place to facilitate them.

“Investment in public mega infrastructure is touted as boosting the economy and regional integration, when in fact the mega projects also consume natural resources,” said Witoon.

Civil society needs to push for a new strategy to cope with such conventional paradigm, Witoon suggested. A specific idea suggested at the forum was strengthening the Asean Intergovernmental Commission on Human Rights (AICHR) so it can better help people who are negatively impacted by massive construction projects.

And protection of the environment should become a fourth “pillar” of Asean, it was agreed.

The group issued a statement backed by its allies expressing hope and demands for “a just, prosperous and genuinely sustainable Asean”.

It included 14 points, including recognition of “the value of nature as the basis of life and foundation for sustainable development ... and not reduced to monetary value”.

It asked that the majority public interest be upheld over than of “elite and wealthy members of society”, and that resources be governed to ensure equitable access.

It sought assurance that “different ethnic nationalities and genders can practise their cultures with full social and legal support, and are protected against prejudice and dis- crimination”.

The “needs and aspirations of local communities, food producers, workers and indigenous peoples” warrant priority over “the interests of corporations and businesses”, it said.

Investments made by people and communities in producing food and protecting their environment should be protected by law, it said, “and respected over those of private, corpo- rate investors”.

“Investor protection provisions”, it urged, should be “removed from trade and investment laws and agreements”, with investors held legally accountable for negative impacts and rights abuses resulting from their projects.

And it wanted “a low carbon and non-extractivist development model” adopted by all countries.

“A ‘people-centred Asean’ cannot be achieved unless the roles, rights and livelihoods of people are sincerely respected and upheld by governments and other relevant actors, specially businesses and corporations,” the statement read.

Premrudee was realistic enough if it would not be a shift for Asean to become also “a platform for the non-state sector”, but she hoped it would embrace a “constructive dialogue” between both sides.

In 2009, Asean-Civil Society Dialogue on Environment was proposed with high hopes placed by the civil society as the starting point.

“What we want to see is that Asean has at least reviewed and accepted its past actions and the ensuing consequences and wants to get serious about a constructive dialogue,” said Premrudee.