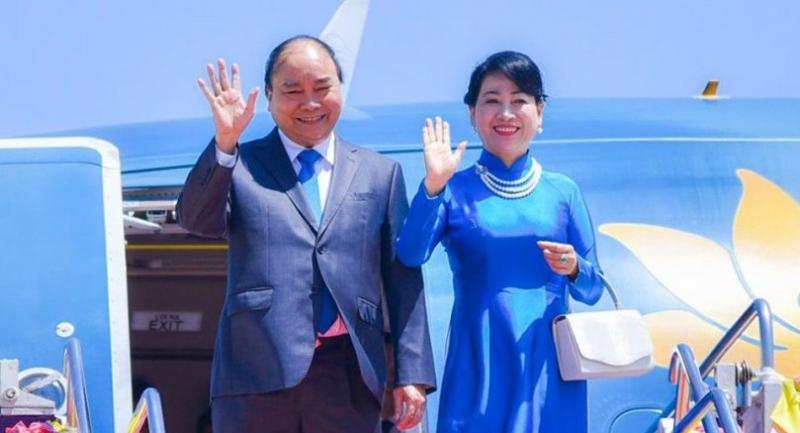 Vietnam's Prime Minister Nguyen Xuan Phuc and his wife arrive in Bangkok for the Asean Summit on Saturday.

Despite progress in negotiations between Asean and China towards establishing a Code of Conduct (COC) for the contentious South China Sea, Vietnam’s Prime Minister Nguyen Xuan Phuc said on Saturday that the situation on the ground remained complicated.

“Unlawful unilateral activities, including land reclamation to change the status quo, militarisation, collisions that put lives of fishermen in danger are worrisome," Phuc told The Nation in an interview via e-mail.

“These behaviours have eroded trust and are not conducive to promotion of dialogue and maintenance of peace and stability in the region,” he said.

Phuc arrived in Thailand on Saturday for 34th Asean Summit where many hot security issues will be discussed.

Vietnam is among Asean members at loggerheads with China over the territorial disputes in the contentious sea. The region became a flashpoint as China began militarisation by building facilities for military use years ago.

The group and China signed a legally non-binding declaration on the conduct (DOC) of parties in the South China Sea in 2002 to regulate the sea, but the situation remains tense.

The group and China are now working to have a legally binding code of conduct to control the behaviour of riparian states. Ministers and senior officials of the group expect to conclude the first reading of the text by the end of this year.

“Against that backdrop, Asean needs to firmly adhere to its fundamental position on the South China Sea, in which the parties concerned should exercise restraint, refrain from any action which may further complicate the situation," Phuc said.

“All parties must refrain from militarisation and seek to resolve disputes by peaceful means on the basis of international law, including the 1982 UNCLOS [United Nations Convention on Law of the Sea], strictly and fully implement the DOC and strive to formulate a COC that is effective and substantive in line with international law and endorsed by the international community,” he said.

Prime Minister Phuc also said maintaining peace, security and stability in the region was a pre-requisite for sustainable development and prosperity of all nations.

“In the meantime, we are witnessing the strong emergence of both traditional and non-traditional security challenges, alongside multiple hotspots that pose serious threats to peace and stability in the region and the world. These have caused major concerns for all of us,” he said.

“It is Vietnam’s position that security issues must be satisfactorily resolved by peaceful means on the basis of international law, so as to avoid their escalation into conflict hotspots, which may pose a threat to peace, stability and prosperity in the region,” he said.

“In recent years, Asean has made efforts to contribute to addressing regional security issues, including the South China Sea, [the ethnic conflict in] Rakhine state in Myanmar, the denuclearisation of the Korean peninsula, terrorism and transnational crimes, among others. Vietnam has been and will continue contributing actively to these joint efforts,” Phuc said.