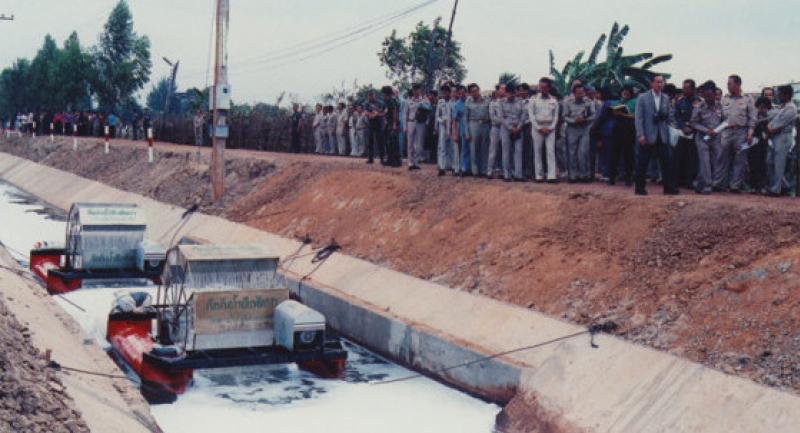 In 1993, HM the King was the first monarch granted a patent for the Chaipattana Aerator.

king Bhumibol was the first monarch to be granted a patent, but his water aerator was just one of many inventions

IN 1993, His Majesty the King became the first monarch to be granted a patent for inventing an innovative aerator that could be used to effectively treat wastewater.

In 1993, HM the King was the first monarch granted a patent for the Chaipattana

The Chaipattana low-speed aerator, Model RX-2, is indeed a world-class invention and was part of the 20-plus patents and 19 trademarks registered by His Majesty, who was also an outstanding artist with a portfolio of more than 1,000 works, including paintings, photos, music and literary works.

The aerator is a machine with a paddlewheel built in the form of a floating buoy that helps add oxygen to water. Thailand’s Department of Intellectual Property granted the patent to His Majesty on February 2, 1993, marking this as the first time a reigning monarch was granted such.

This date was then marked as the country’s Inventors’ Day. Later, another model of the aerator, the RX-5, was patented in 2001.

According to Dr Sumet Tantivejakul, secretary-general of the Chaipattana Foundation, His Majesty invented the aerator after observing how the problem of polluted water in canals and other sources affected people’s well-being.

“His Majesty the King granted the mechanical aerator and directed the Chaipattana Foundation to provide funds for research in connection with the information with a view to increasing the level of oxygen in water and cutting down pollution.

“In the initial stage, His Majesty introduced a pilot-model of the Chaipattana Aerator at Bowonniwet Wihan Temple. The model worked so well that it resulted in on-going development and application in several areas. This evidenced his genius for developing concepts in ways that are simple enough for them to be widely applied, while at the same time bringing about remarkable results. This could only happen due to His Majesty’s great erudition and amazing command of a full range of relevant aspects of each issue,” Dr Sumet said.

As a floating device, the Chaipattana aerator efficiently increases oxygen levels, making it suitable for areas where tidal water is polluted. Apart from treating polluted water, it also oxygenates ponds used for rearing aquatic animals, making it an invaluable invention for agriculturalists.

According to the National Research Council of Thailand (NRCT), the Chaipattana aerator resulted from HM the King’s concern for the health of people who live in communities with polluted water sources and industrial waste.

“This invention is highly beneficial for several purposes and can be installed both as stationary and mobile units. The integral part of this invention is its scoop, which is designed in a trapezoid form in order to get more water to increase the surface contact of water with air. This enables oxygen to be absorbed into the water faster. When the water is raised to touch the air and falls to hit the surface of the water, the air bubbles sink into the water and ventilates it.

“Then, when the scoop inverts on the surface of the water, there is oxygen in the scoop, which generates maximum air. This invention is capable of assuaging the biochemical oxygen demand [BOD] 5 of polluted water in the range of 250 mg/litre for 600 cubic metre per day.

“This helps reduce more than 90 per cent of the BOD and is much cheaper. It costs just Bt0.96 per cubic metre and Bt3.84 per BOD kilogram unit. This device has already been patented and is widely used both in the private and government sectors. It implements higher technology than any other existing inventions and can be considered as the ninth innovation of the world,” the NRCT said.

In 2000, the Chaipattana aerator earned international recognition when the Belgian Chamber of Inventors presented His Majesty with the “Gold Invention Award” at the Eureka Exhibition held in Brussels that year due to the aerator’s value in terms of water treatment around the world. Later, a Chaipattana aerator was presented as a gift to Belgium and installed at Woluve Sainte-Pierre park in the heart of Brussels.

Before coming up with this invention, His Majesty had also developed various techniques for artificial rain-making in 1955, after observing that people in the Northeast were poverty stricken due to droughts and floods. This invention won him the title of “Father of Royal Rain-making”.

Another important contribution to Thailand’s energy sector came in 1985, when His Majesty launched the production of bio-diesel as a way of reducing dependence on imported energy.

In 1985, HM the King started the experimental production of bio-diesel by creating a for¬

mula for conventional diesel and locally-available palm oil, which set the stage of the

development of bio-fuels in Thailand.

He suggested that a mixture be created of conventional diesel with locally available palm oil with the latter accounting for 5 per cent of the fuel content. His formula for this bio-diesel works well with all types of diesel-run engines, without any need to have them modified.

The formula of the bio-fuel, which is also environmentally friendly, was patented in October 2002 at a time when rising fuel costs became a burden on the poor, who benefited from the alternative and cheaper energy source.

Apart from this, His Majesty invented a computer program for Devanagari characters – or “Pasa Khaek” – as well as a comprehensive garbage eradicator, which not only incinerates garbage but also produces ash that can be used for construction and gas that can be converted into electricity, the NRCT said.

Last but not least, there is the mist collector, which provides effective support for reforestation efforts in highland areas by helping to solve regional water shortages.

Dr Sumet said: “The fact that His Majesty holds a patent for an important invention provides an outstanding example for Thai inventors, inspiring them to continue in their efforts to create all manner of things that will benefit the country in the knowledge that their rights to the inventions will be protected.”

Apart from patents, the King also registered a popular trademark called the Suvarnachad, which features his favourite dog Tongdaeng.

“Literally meaning copper, Tongdaeng was a stray adopted by the Palace in 1998. His Majesty praised Tongdaeng’s qualities of gratitude and loyalty. Other trademarks owned by His Majesty include Golden Place and Thammachad. The New Theory approach [for farming] and the Story of Mahajanaka, one of His Majesty s famous books, were registered as copyrighted works in 1998. In the same year, his artistically designed medallion illustrating a scene from the Story of Mahajanaka was also copyrighted,” he said.

HM King Bhumibol is seen visiting a Golden Place supermarket at Siriraj Hospital. Golden Place and Suvarnachad were among the trademarks registered by HM the King.

The World Intellectual Property Organisation (WIPO) also recognised His Majesty’s contributions in this field – both as an inventor and as an active proponent of intellectual property as a tool of development. As a result, WIPO presented its first-ever Global Leaders Award to His Majesty the King in 2009.