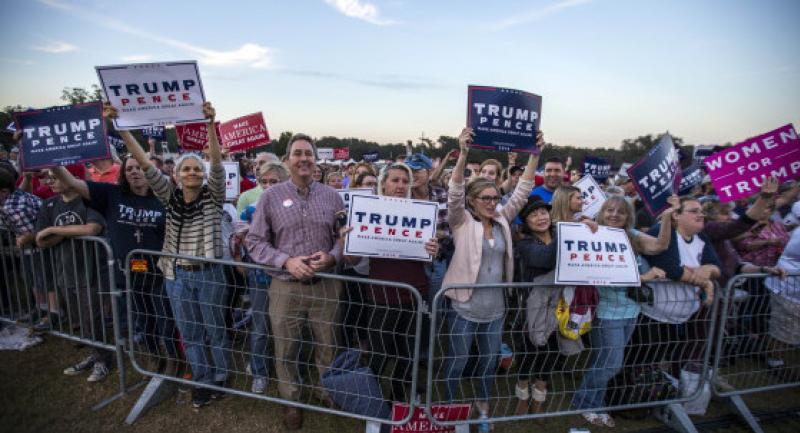 Supporters cheer Republican presidential candidate Donald Trump as he speaks during a rally at the Antique Car Museum property on October 25, 2016 in Tallahassee, Florida./Mark Wallheiser/Getty Images/AFP

This is the central Florida community of The Villages, developed especially for retirees, which has become an important Republican stronghold in White House hopeful Donald Trump's play for this key southeastern US state.

In each driveway sits at least one golf cart, often decorated with decals for Trump.

"They are people who worked hard, saved their money, feel very strongly about the opportunities they had in this great country," said John Calandro, chairman of the Sumter County Republican Party.

Happy to chat, many receive reporters with open arms.

During a drive in Calandro's golf cart, which bears a sticker reading "Veterans for Trump," he points out various churches and golf courses, and notes that no resident of The Villages was born here.

Many are so-called snowbirds, retirees who move to Florida to enjoy its warm climate.

"It's kind of exciting to talk to people from all over the country and to see the common values they have," said the Vietnam War veteran. "We are strong believers in capitalism."

Marina Woolcock, president of the community's chapter of the National Federation of Republican Women, agreed.

"It really is a community of like-minded people," she said.

"We were fortunate enough to have enough money to move out of Buffalo, New York, where there is snow, to a community here with a lot of programs, great golf courses... So we enjoy the lifestyle," she said.

Late in the afternoon, a small fair is underway in the centre of the community, with couples dancing in the square. Others remained seated, watching the scene with a smile. Many wear hats or clothing with Republican slogans.

"It's traditionally a very conservative area," said Ann Boyd, a retired teacher who works on the local Democratic campaign. "If you look at the map of Florida, there's a big red spot where The Villages is."

Boyd said her Republican neighbors bother her about her politics, making her feel marginalized. She wouldn't go to the square to dance in a T-shirt that identified her as a Democrat, for instance.

"We usually keep a low profile, because they sort of assume everybody thinks the way they do, and that's not so," she said.

According to the Florida Division of Elections, 53 per cent of voters in Sumter County, which has 118,000 inhabitants, are affiliated with the Republican Party.

That's compared to 26 per cent of US adults nationally who identify as Republican, according to a Gallup poll.

For that reason, The Villages and retirement communities like it are important to Trump in his race for the White House.

"Trump has little chance of winning the election. His only chance is through Florida. To win Florida, he will need to rely on older voters who are more likely to vote for him than younger voters," said Joseph Uscinski, a political science professor at the University of Miami.

Florida is one of the most important battleground states in the November 8 presidential election.

But what makes it key, besides its size, is that it swings between liberal and conservative tendencies, leaving a very small margin between Trump and his Democratic rival Hillary Clinton.

Its electoral complexity lies in its diversity. Basically, the southern part of the state is Democratic, the north is Republican.

The centre --  a stew of Puerto Rican Democrats and retired Republicans -- is the real battleground.

According to RealClearPolitics, a website that tracks polls and politics, Clinton had a 3.8 point lead over Trump in Florida as of October 21. But the results could still change, and a turn in Florida could define the outcome nationally.

Everyone here still remembers the contested Florida recount in the 2000 presidential election that ended with the US Supreme Court declaring George W. Bush the winner in Florida by 537 votes. That win gave Bush enough electoral votes to win the election nationally, even though his Democratic rival Al Gore had more popular votes.