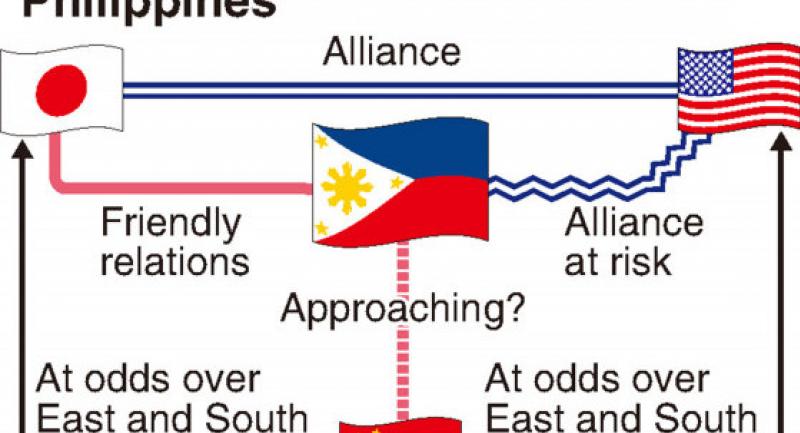 Abe is concerned the regional security structure might be affected if the Philippine president strengthens his stance of leaning toward China. Duterte said the Philippines was on Tokyo’s side over the South China Sea issue, but it still remains to be seen if this will lead to a change in his anti-U.S. political stance.

At their talks, Abe and Duterte exchanged views on the significance of both the Japan-U.S. and U.S.-Philippine alliances for regional security. The prime minister appears to have urged Duterte to place importance on relations with the U.S.

It is unusual for a Japanese prime minister to act as a bridge between the U.S. and another country. A senior Foreign Ministry official explained that what pushed Abe to do so was his extraordinary determination to “tie up the Philippines in the Japan-U.S. camp.”

Aiming to put the brakes on China’s unilateral maritime advances in the South China Sea, Tokyo has been employing a strategy to heighten pressure on Beijing in coordination with relevant countries by using as leverage the arbitration court ruling in July that rejected China’s sovereignty claims over the sea.

If China and the Philippines accelerate their deepening ties, Tokyo would have to review the basic strategy, especially given that Japan has focused on Tokyo-Washington-Manila trilateral cooperation as a key component.

Japan had been especially concerned about Duterte’s stance on the arbitration court ruling as the Philippine president practically shelved it on his recent visit to Beijing. Tokyo was relieved to hear him say during the meeting with Abe that the ruling was legally binding.

Tokyo is divided over how to interpret Duterte’s statement because he has flip-flopped on his remarks. The government is yet to determine whether he is a tough strategist eyeing to extract economic cooperation while balancing Manila’s relations with Washington and Beijing, or a U.S.-hating troublemaker who does not understand the reality of diplomacy and security issues. “It will take a little more time to solidify our evaluation of Duterte,” a senior government official said.