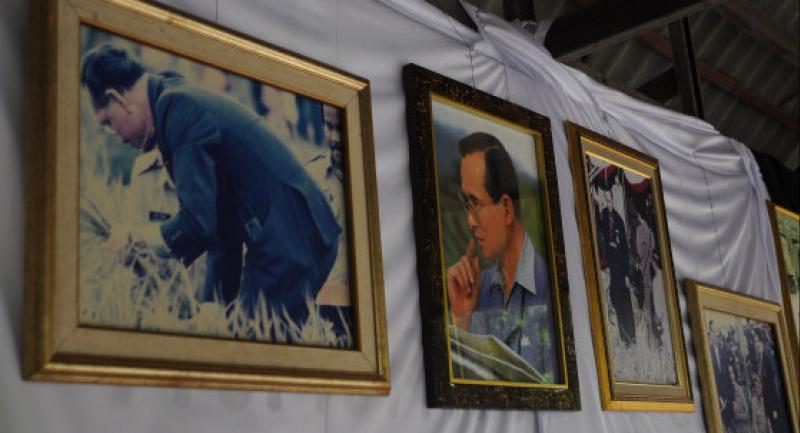 Photos of His Majesty the King taken during his many rural visits, displayed on the wall at the Mab-Ueang Agri-Nature Centre.

“I WAS VERY STUNNED WHEN I FIRST LISTENED TO THE IDEA... HIS MAJESTY HAD THOUGHT OF SEVERAL OTHER THINGS [THAN WE HAD] – THE COMMUNITIES’ SOCIOCULTURAL NATURE, THE ENVIRONMENT, FARMERS’ HEALTH, THEIR QUALITY OF LIFE, AND SO ON.”

THE EARS of the Lueang Thong Bai rice have started to bend down toward the ground, one by one, in Wiwat Salayakamthon’s learning centre for organic farming. This type of rice is a native variety, so Wiwat and his young followers need no chemicals to help the Lueang Thong Bai crop stand against diseases. Pesticides are not needed; the soil, water and air around the centre are always free from contamination. Further away, one whitish egret flutters before landing on a swampy rice field, in search of food. Small fish swim in the water, while crabs crawl rapidly over the mud before disappearing from sight.

Here in this nearly 10- rai ( 1.6 hectare) plot of land, Wiwat is reminded of the solid proof once again that the caring and sharing way of life has taken a deep root in this land and keeps blossoming – just like the philosophy behind it that he has embraced and planted into the soil of this educational farm he founded over 30 years ago.

“We grow rice on this plot of land, which has long fed us and our friends who come to visit us. And you can see that other living creatures can also live here too,” said Wiwat in a soft but firm voice of a senior man in his 60s, pointing to the egret feeding in the field in the last golden sunlight.

For more than 30 years, Wiwat has followed the sufficiency economy philosophy introduced by His Majesty the King, whose passing has left Thais in deep sorrow for over two weeks. However, his legacy remains fresh and vivid in people’s minds, including Wiwat’s.

Young and self-confident, with a sophisticated education from various Western schools, Wiwat was a development project planner in the Office of the Royal Development Projects Board serving His Majesty. He had been eager to help boost the quality of life for his fellow Thais. Wiwat followed His Majesty the King to several remote areas. He took notes for him while the King spoke with state officials, then processed them, and came up with development plans based on the conversations and His Majesty’s recommendations before tabling them for the King to review and approve before implementation.

At that time, the term “sufficiency economy” had not been used. As far as Wiwat can remember, a similar idea from His Majesty was given to farmers around 1974, when he suggested that they lead a self-reliant life because they had trouble with cash crops. It was in the King’s six development study centres, set up in all regions in the early 1980s, that the idea was nurtured, as His Majesty wanted to promote a more sustainable way of life.

Wiwat became more familiar with the idea at the Huai Sai Royal Development Study Centre in Phetchaburi province, where he was given a chance to propose His Majesty’s key development plans to improve people’s quality of life.

“In the western region at that time cash crops like pineapples were extremely destructive,” Wiwat recalled with a still vivid memory. “When their produce flooded the market such crops not only plunged farmers into debt, it also destroyed forests, which are fundamental to the health of the farmers’ life-sustaining environment.”

Given his training in Western schools of thought, Wiwat and his colleagues did not hesitate to apply this thinking to their work. They analysed the farmers’ constraints and opportunities based on knowledge of science and economics – geography and market opportunity – before coming up with a proposal to grow pineapples again. “It’s the best crop that fitted the soil condition there,” said Wiwat. This was despite the fact that he and his colleagues realised there would be further challenges to tackle based on their choice.

But, contrary to his team’s analysis, the King started with the challenge of how to help the farmers live in a sustainable way and in a healthy environment. So, he started with something fundamental and essential to people’s livelihoods – rice. His first question was how to help the embattled farmers grow rice and have rice to eat in their communities. With enough rice, farmers would not need to travel far to sell crops. They would no longer poison their land, their health, or environment. More importantly, they would not have to rely on external items – they would become self-reliant.

“I was very stunned when I first listened to the idea. Oh, it was like I was knocked down on the canvas during a fight while defending my proposal,” Wiwat recalled, his voice raised to a high pitch. “While we only thought of something very scientific and economic – the good produce of pineapples and money, and did not care whether the farmers would get sick from excessive use of chemicals, His Majesty had thought of several other things – the communities’ socio-cultural nature, the environment, the farmers’ health, their quality of life, and so on.

“It was people that meant the most to him, and this turned my world upside down. I just realised that this was my grandparents’ way of life that I had forgotten. So, I was awoken to the fact, and started to think all over again. My Western ideas were useless, as the philosophy behind them was wrong in the first place. His Majesty called it the ‘greedy-eyed economy’ ( setakit da too). ”

Wiwat and his colleagues were instructed to detach themselves from their books and start to learn from the ground up. This, Wiwat said, was very scientific as it was actually a scientific methodology of formulating a new theory. From action to action in these development study centres, the “sufficiency economy philosophy” was nurtured through His Majesty the King’s experiments and teachings to these young experts. It was not until 1997 when the country faced an economic crisis that the philosophy was publicly introduced to Thai society for the first time.

“I call it a grand theory,” said Wiwat, who is a member of the National Reform Steering Assembly’s panel on education. “With this theory, it can be adapted to fit the circumstances of various sectors in society, not just farm sector.

“This is made possible because it primarily originated from His Majesty’s holistic view in the first place. His Majesty travelled the world extensively, seeing the wide world since he was young and having such a holistic view developed inside him. When he was back in the country, he managed to adapt such a view to suit local conditions when formulating new development theories. It’s the visionary view of ‘ think global, act local’.”

Wiwat adopted the philosophy shortly after he learned about it at Huai Sai. He experimented with the idea on his family’s plot in Chachoengsao province before expanding it to the Mab-Ueang AgriNature Centre in Chon Buri province. Armed with nearly 50-rai plot of land and following the theory, Wiwat divided the land up into a rice field, gardens, ponds, forests, and shops for the sale of the produce. This has set an example for other organic farmers and become the country’s prime organic-farming learning centre with nearly 50 organisations based on sustainable farming in the network.

Under the philosophy, Wiwat still sticks to the three prime principles – moderation, rationality, and selfimmunity. But what he emphasises most is the two critical conditions for successful implementation of the philosophy: knowledge and morality.

“These two conditions are the most critical elements of the philosophy, but people tend to concentrate only on the first three elements,” said Wiwat. “It holds true especially that concerning morality. You may have heard the phase ‘our loss is our gain’. It’s actually at the heart of the philosophy, as it’s the first and foremost of a King’s virtues, or merit making.”

As an NRSA member, Wiwat said the state has realised the philosophy’s importance, recognising that it is the key path to a sustainable economy and society. It has adopted the philosophy into policies and the reform plans that the NRSA has helped formulate. However, Wiwat said getting the public to implement the philosophy was still a problem. He estimates that it has been adopted by less than 10 per cent of Thais, but many organic farmers. The problem, he said, was still with the implementation.

“His Majesty the King said to pursue life with the sufficiency economy philosophy, you have to be serious with it, not doing it just for fun, or it would be a waste of time otherwise,” said Wiwat. “[Probably] people just don’t quite understand the philosophy well. They may not believe in it, or have faith in it.

“Most importantly, the philosophy goes against what’s lying deep in people’s hearts, which is our own greed, and that’s probably also the reason why we still don’t embrace it.”

Award from the UN

His Majesty the King’s sufficiency economy philosophy has been recognised internationally, with the United Nation bestowing him with the UN’s first Human Development Lifetime Achievement Award in 2006. Former Secretary-General Kofi Annan, who presented the award to His Majesty, hailed the monarch’s tireless 60-year-long efforts to help the poorest and most vulnerable people in his Kingdom as an example to the world.

“Your Majesty has made an extraordinary contribution to human development. As the world’s ‘Development King,’ Your Majesty has reached out to the poorest and the most vulnerable people of Thailand – regardless of their status, ethnicity or religion – listened to their problems, and empowered them to take their lives in their own hands.”

The accolade was awarded by the UN Development Programme, and Annan cited the King’s countless rural development projects that have benefited millions of people across Thailand, promoting smallscale agriculture, appropriate farming technologies, sustainable use of water, conservation, and flood and drought mitigation.

“As a visionary thinker, Your Majesty has played an invaluable role in shaping the global development dialogue. Your Majesty’s ‘Sufficiency Economy’ philosophy, emphasising moderation, responsible consumption, and resilience to external shocks – is of great relevance worldwide during these times of rapid globalisation,” the UN chief said.

Click: No better way to show our love than by NURTURING His Majesty’s philosophy