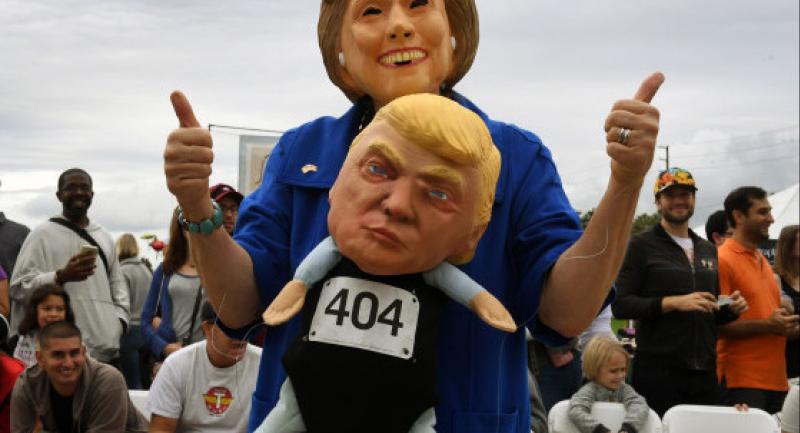 Nine days before the vote, the 69-year-old former secretary of state hit the campaign trail hard in the battleground state of Florida.

Clinton blazed through brunch at an Irish pub, an African-American Baptist church, a soul food restaurant, an early voting site and a rally at a gay nightclub.

Much of her two-day visit to the Sunshine State focused on encouraging early voting. Clinton says a record 200 million Americans have registered to vote, 20 million of whom have already done so.

But her campaign was jolted when FBI boss James Comey announced Friday that his agents are reviewing a newly discovered trove of emails, resurrecting an issue Clinton had hoped was behind her.

The nominee's response has been to hit out at Comey's move as "deeply troubling" and to rally supporters to get out and vote, turning the tables on Trump by branding him as unfit to lead the nation.

"When you're knocked down, what matters is whether you get up again," she told a packed LGBT rally at a gay nightclub in Wilton Manors, just outside Fort Lauderdale.

"With Donald, it's always Donald Trump first and everyone else last. He abuses his power, he games the system and doesn't care who is left holding the bag," she added.

Allegations Clinton put the United States at risk by using a private email server while secretary of state were thrust back into the spotlight Friday when Comey revealed a renewed FBI probe into the matter based on a previously unknown trove of emails.

Trump -- himself under fire for alleged sexual impropriety and facing misconduct allegations from 12 women -- has gleefully seized upon Comey's move in an attempt to offset his own trailing in most polls.

The Republican campaigned hard Sunday, attending church in Las Vegas, before leading three rallies in Nevada, Colorado and Albuquerque, New Mexico, whipping up his support base against Clinton.

"We all know about Hillary's mounting legal troubles, that she has brought onto herself with her serial, wilful, purposeful and deliberate criminal conduct," he told the crowed in New Mexico.

"Hillary Clinton is not the victim, you the American people are the victims of this corrupt system in every single way and folks this is your last chance to save it," he said to chants of "lock her up."

The 70-year-old tycoon repeatedly has described her email issue as "the single biggest scandal since Watergate" -- the wrongdoing that brought down Republican president Richard Nixon in 1974.

The Clinton campaign has reacted with fury to Comey's move, demanding that he explain in detail why he had effectively reopened an inquiry declared complete in July.

The US Senate's top Democrat told the FBI chief that through "partisan actions, you may have broken the law."

"As soon as you came into possession of the slightest innuendo related to secretary Clinton, you rushed to publicize it in the most negative light possible," Senate Minority Leader Harry Reid said in a statement.

While the candidate looking to make history as America's first female president remains the overwhelming favorite, polls are narrowing.

An ABC News/Washington Post survey put the Democratic presidential candidate just one point ahead of her Republican challenger.

In Florida -- a must-win state for the tycoon -- Trump overcame a one-point deficit in September to enjoy a four-point lead, according to a New York Times Upshot/Siena College Research Institute poll.

According to US media, the probe was renewed after agents seized a laptop used by Clinton's close aide, Huma Abedin, and her now estranged husband, Anthony Weiner.

The disgraced former congressman who resigned in 2011 after sending explicit online messages is under investigation over allegations he sent sexual overtures to a 15-year-old girl.

The Washington Post wrote late Sunday that it learned from one US official that the total number of emails recovered in the Weiner investigation is close to 650,000 -- although not all of them are relevant to the Clinton investigation.

US networks reported Sunday that the FBI had obtained a warrant to search the emails. According to CNN, discovery of the emails occurred weeks ago although the FBI did not reveal the matter until Friday.

"She just has to call her friend and confidante Huma Abedin and say tell us what's in the emails, tell us what's on the devices that you shared with your pedophile husband," Conway told Fox News.

Clinton's campaign has been overshadowed from the start by the scandal, but experts believe the FBI is unlikely to make significant progress before election day and few expect her to face charges.