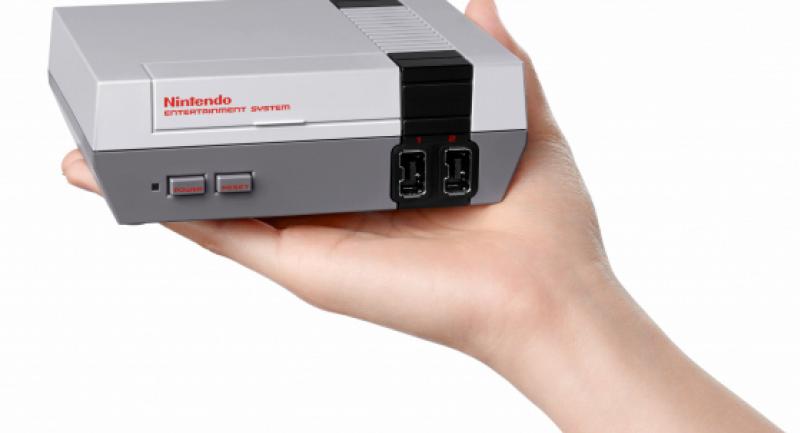 TOKYO - Nintendo on Thursday launched a palm-sized version of its eighties era games console, setting up an old versus new showdown with rival Sony as it released a new PlayStation 4.

The dual launches marked a new chapter in the battle for supremacy between Japan's top videogame companies as they try to deal with a sharp rise in mobile gaming.

Scores of excited gamers queued at electronics stores in Tokyo to try to get their hands on the Nintendo's new version of its Famicom and Sony's PS4 Pro.

The smaller version of Nintendo's classic console, known as the Nintendo Entertainment System (NES) overseas, sold more than 60 million units after its 1983 launch.

The new mini-console retails for about $60 with a strong nod to nostalgia by letting gamers lower screen quality to mimic playing on an old television.

The console is installed with 30 games including Nintendo's famed Super Mario and Donkey Kong characters.

Sony's cutting-edge machine retails for about $400 and promises even sharper graphics than earlier versions of its PS4, which have sold over 40 million units globally.

Most consoles had already been pre-ordered, dashing the hopes of some Japanese gamers who rushed to stores for the double launch day.

"We stopped taking pre-orders some time ago because demand for both machines was beyond expectations," Yuko Harima, a spokeswoman for retail electronics stores Bic Camera, told AFP, without disclosing sales figures.

Nintendo's system is being released in Europe and North America on Friday.

The two offerings are very different but their launch could herald a new turf war among the rivals, said Hirokazu Hamamura, who heads game magazines publishing at the Kadokawa media group.

"You may think it's no big deal that the cutting-edge high-end game machine and old-style Famicom make their debuts on the same day, but I don't think so," he said.

"This really illustrates that we could see a platform war in the coming years," he told a recent seminar in Tokyo.

Both firms are competing to win so-called crossover customers who use smartphones, game consoles and traditional computers, he added.

Nintendo has been looking for a hit to counter flagging Wii U console sales, after making a long-awaited debut in the mobile gaming market for the first time earlier this year.

Meanwhile, the firm last month stumbled as it gave a sneak peek at a long-awaited new console called Nintendo Switch.

The hybrid machine can be played at home and on the go, thanks to a removable screen like a tablet with the controllers attached.

But the release of a three-minute video of the system left investors underwhelmed, sparking selling on the Tokyo stock market of shares in Nintendo, which had been buoyed by the success of "Pokemon Go" smartphone app earlier this year.