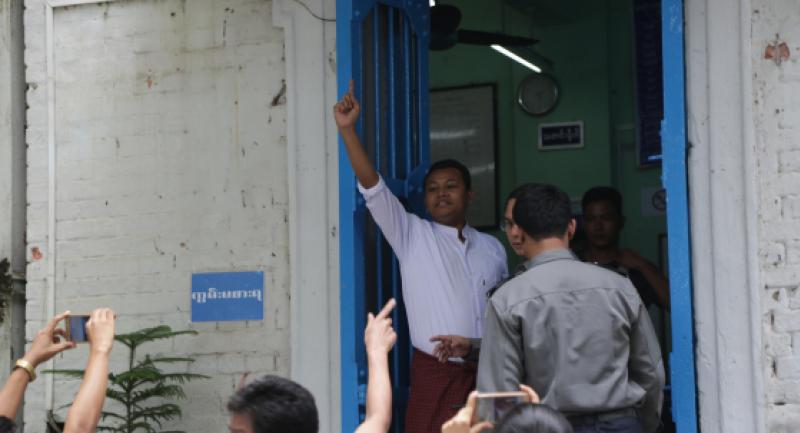 SEVERAL international media and rights organisations have called on the Myanmar government to immediately release two senior journalists of the Eleven Media Group, who were detained on a defamation charge.

On Friday, chief executive officer of Eleven Media Group Dr Than Htut Aung and Chief Editor Wai Phyo reported to a district police station and were then taken to court. Later they were sent to Insein Prison, with the next court hearing due on November 25.

Editors of the Asia News Network, of which Eleven Media is a member, have expressed shock and dismay at the detentions.

Both Eleven Media journalists were charged under the Section 66 (d) of the Telecommunications Act following a case filed by the Yangon Region government, whose Chief Minister Phyo Min Thein is himself a former political prisoner and a key member of the ruling National League for Democracy (NLD) Party.

The case is based on a Facebook post of an article “Myanmar: A year after the Nov 8 polls” on the first anniversary of the national election that saw the NLD sweep to power, about democracy and development in Myanmar facing hurdles of cronyism and corruption.

The article was also translated into English and carried by several members of the Asia News Network, an alliance of 20 media outlets in 18 Asian countries. Eleven Media is a member of the network.

Asia News Network said in a statement that it is the duty of the government to ensure the law was not used to stifle comment or to curb freedom of the press.

It was important, the editors said, for a young democracy to not be perceived as draconian, or as reacting disproportionately to criticism.

While the ANN editors appealed to the authorities in Myanmar and particularly Yangon region officials, stressing that the law must take its course, the editors felt no useful purpose would be served by detaining the two journalists without bail. On the contrary, such detentions would only intimidate the media and impede the democratic process that party leader and de facto head of government Aung San Suu Kyi and her party had fought long and hard for.

The call was echoed by Rafendi Djamin, Amnesty International’s Regional Director for Southeast Asia and Pacific. “Arresting and detaining these two men raises serious concerns about the NLD-led government’s commitment to freedom of expression,” Djamin said. “Using repressive laws to stifle peaceful criticism of government officials could cause other media workers in Myanmar to engage in self-censorship. State officials are not above scrutiny, and journalists have an important role in holding them accountable,” Djamin said.

Legal Aid Network released a statement that said the case would drag Myanmar media back to the “dark ages” with no one daring to criticise the authorities. It said the government led by NLD and the Yangon chief minister should value Eleven Media in maintaining public interest with anti-corruption reports.

In contrast, the Myanmar Press Council said it could not intervene in a case involving the Eleven article despite a request to do so by the Yangon Region government, as the later needed to first withdraw its lawsuit, as stated in the Media Law.

On Friday, chief editor of Eleven Media Group Wai Phyo said: “We are here today. The CEO and me went for interrogation as we are charged with violating the Telecommunications Law 66 (d) by the Yangon Region government. It is an unfair law. Every citizen should get equal rights under the law. If action is taken under 66(d), then let there be fairness and justice. We’ll be back pursuing the truth. We’ll be back for Eleven to bring out the truth. Please stand by justice.”

Chief Minister Phyo Min Thein had told a press conference last week that “The post was intended to defame my personal dignity, was a misrepresentation and it has disturbed my activities.”

The Foreign Correspondents’ Club of Myanmar, in a statement, expressed deep concern about the arrest and legal action against Eleven Media Group journalists.