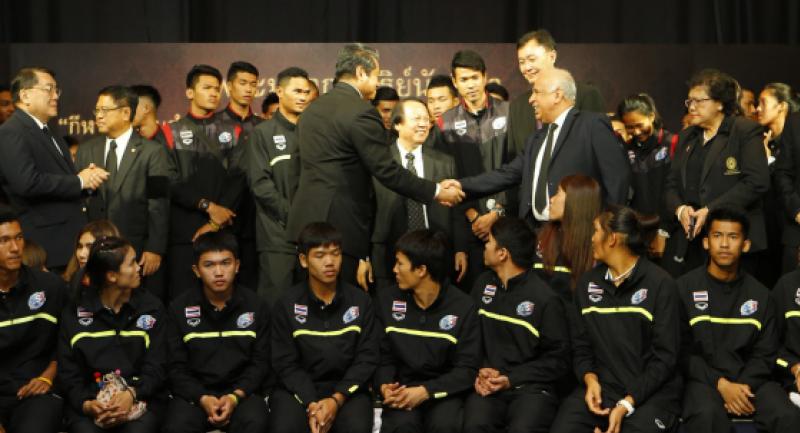 FIVB and AVC Executive Vice President Mr Essa Hamza Ahmad Al Failakawi was a prominent guest of honour at the “Volleyball Thai, Huajai Diew Kan”(Thai Volleyball, the Same Heart), an annual come-together campaign of Thailand volleyball families to recognize successful activities and celebrate their great achievement and thank their members for persistent efforts and dedication over the past year.

Also attending as guests of honour were Mr Essa Hamza, who was on visit to Thailand to make sure all AVC assignments and work will get done properly ahead of the year end and prepare strategic planning for next year’s goals, and AVC Secretary-General Mr Shanrit Wongprasert.

On the same occasion, a charitable activity was held in remembrance of His Majesty the late King Bhumibol Adulyadej to coincide with the one-month mark of the passing of the beloved monarch. Making merit and a ceremony of offering lunch to 10 venerable monks also took place to present as an act of charity to the late King.

H.E. Mr Palakorn led all participants in mourning the passing of His Majesty the King and expressed gratitude towards his dedication for the entire life to the betterment of the country and the well-being of Thai people from all walks of life. All participants then sang the Royal Anthem before taking part in a one-minute silence in commemoration of His Majesty the late King Bhumibol Adulyadej.

Aside from Mr Essa Hamza’s attendance on Sunday, FIVB President Dr Ary S. Graca and AVC President Dr Saleh A. Bin Nasser earlier extended their deepest condolences on the King’s passing in their messages to the TVA and Thailand’s sports key persons.

H.E. Mr Palakorn presented Bt15-million cash incentives to Thailand men’s and women’s national team players both indoor and beach volleyball and their staff coaches following their remarkable successes over the past year.