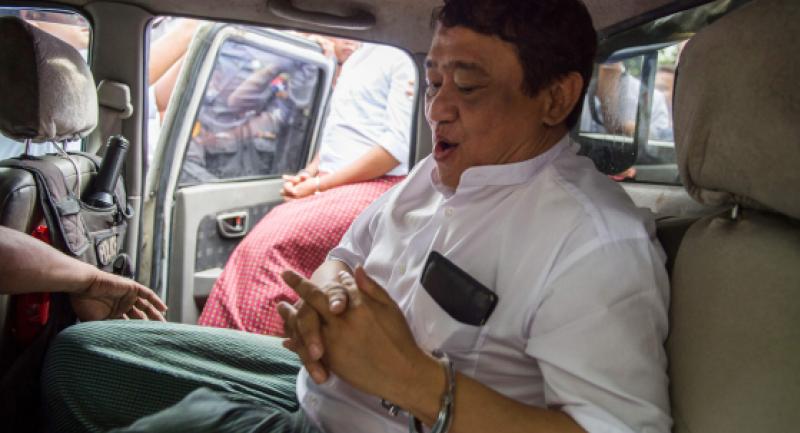 Than Htut Aung, CEO of the Eleven Media Group, is seen in handcuffs after appearing in court in Yangon on November 11. //AFP

PARIS - The World Association of Newspapers (WAN) and News Publishers have echoed international concerns that the detention of the two Myanmar journalists from Eleven Media Group caused serious doubts about the National League for Democracy-led government’s commitment to freedom of expression.

In a letter to Myanmar President Htin Kyaw, WAN and the World Editors Forum called on Yangon Region Chief Minister Phyo Min Thein to drop the charges against Dr Than Htut Aung and Wai Phyo, CEO and Chief Editor of Eleven Media respectively.

Both men were detained in prison, waiting a court hearing on Nov 25.

WAN PresidentTomas Brunegård and World Editors’ Forum Marcelo Rech wrote jointly to the Myanmar government, representing 18,000 publications, 15,000 online sites and over 3,000 companies in more than 120 countries, “to express our grave concern at the arrest and imprisonment of senior media executives from the Eleven Media Group and urge you to intervene to guarantee freedom of expression in Myanmar.”

The two Myanmar journalists were charged charged under Section 66(d) of the Telecommunications Act following the publication of the Myanmar language version of an article written by Dr Aung. The article, originally published in English across a number of Asia News Network newspapers, assessed the state of Mynamar one year on from historic elections that took place in November 2015.

The piece was subsequently published in Daily Eleven and on its Facebook page and addressed allegations of corruption within the new government that had been circulating on social media. The Yangon Regional Government, under the auspices of Chief Minister Phyo Min Thein, reacted by calling for the sources of the accusations to be revealed and referring the matter to the Myanmar Press Council.

Eleven Media Group has refused to answer the Regional Government’s questions and denounced the pressure as an attack against press freedom, instead calling for full and transparent investigations into the allegations. The media group has pledged full cooperation with any public inquiry that may be formed to examine the allegations.

The WAN executives said,”We are appalled that journalists in today’s Myanmar are being sent to jail for exercising their right to freedom of expression. In actions that have more in common with Myanmar’s dark past, rather than its bright future, we must echo international concerns that the detention of the two men raises serious doubts about the National League for Democracy-led government’s commitment to freedom of expression.”

“We call on Chief Minister Phyo Min Thein to drop the charges against Dr Than Htut Aung and Wai Phyo and for the two men to be immediately released from prison. The Chief Minister must accept that his position of public authority opens him up to a higher level of scrutiny and accountability, and that it is the role of media in a democracy to do precisely this.”

WAN and The Editors’ Forum urge the Yangon Regional Government to reaffirm its commitment to the reform agenda, and to resist any reactionary moves that would set back this agenda or undermine the results achieved so far. Myanmar has embraced change and as a result a society based on the respect of human rights is rapidly being rebuilt.

“We urge the NLD and those with the power to influence the direction this young democracy takes to use their influence wisely and to do everything in their capacity to protect the freedom of the press as a critical measure of progress in the country,” the letter said.