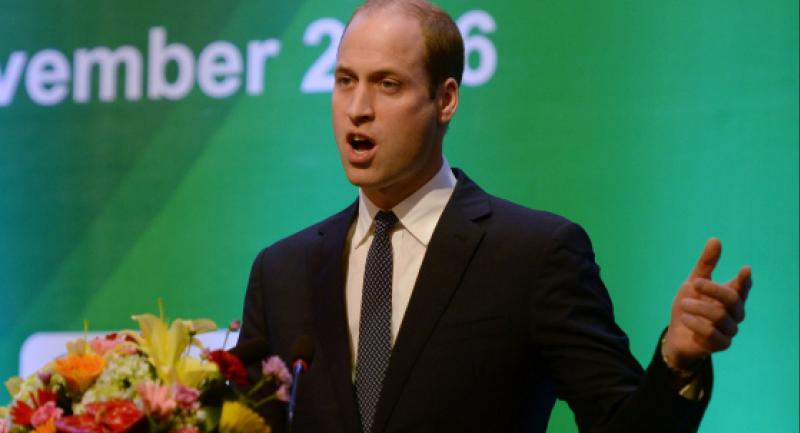 Britain's Prince William, Duke of Cambridge delivers a speech at the opening of the Hanoi conference on Illegal Wildlife Trade in Hanoi on Thursday. / AFP PHOTO / HOANG DINH NAM

HANOI - Britain's Prince William on Thursday delivered a dire warning on the fate of the world's endangered wildlife, telling a major conference in Hanoi that vulnerable species are being killed at a "horrifying" rate.

Vietnam is a global hub for the illicit trade of contraband animal products, including ivory, rhino horn, pangolin, tiger and bear parts.

The communist country is both a top consumer and popular transit route for illegal products from Africa that are smuggled over to other Asian markets, notably China.

Speaking at the Hanoi Conference on Illegal Wildlife Trade, William urged governments around the world to act quickly to save vulnerable species before it is too late.

"We know that we aren't moving fast enough to keep up with the crisis. Rhinos, elephants, pangolins, lions, they are still being killed in horrifying numbers," he said.

"While we've made progress, the truth is we are still falling behind. A betting man would still bet on extinction."

The prince, who has become a champion of wildlife conservation, added that recent data showing a 30 per cent decline of elephant populations in Africa in the past seven years "confirmed our worst fears".

He cautioned that poachers and trafficking syndicates are becoming more sophisticated and said tastes for wildlife products like ivory and rhino horn need to be curbed.

The illegal wildlife industry, estimated to be worth $20 billion, is driven chiefly by demand in Vietnam and China for traditional medicines and decorations fashioned from the animal products.

Conservationists say the trade has already severely depleted animal populations, especially in Africa, and threatens to wipe out critically vulnerable species like elephants and rhinos already on the brink of extinction.

"This is a global issue and no single industry, sector or country can effectively combat the problem of illegal wildlife trafficking without a comprehensive collaborative mechanism and strong commitments to action."

The Hanoi Conference on Illegal Wildlife Trade is the third held since 2014 -- previous meetings were held in Britain and Botswana -- and the largest of its kind ever hosted in Vietnam.

More than 40 countries were represented at the meeting, along with NGOs and conservation groups.