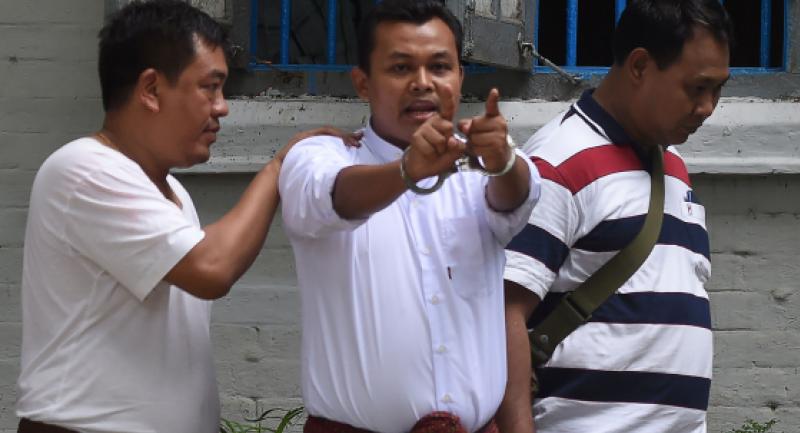 Wai Phyo (C), chief editor of the Eleven Media Group, is seen in handcuffs as he is escorted by plainclothes police at a police compound in Yangon on November 11, 2016. / AFP PHOTO / ROMEO GACAD

The RSF joined other leading global media organisations to call for immediate release of Than Htut Aung, the CEO of the Eleven Media Group, and Wai Phyo, its chief editor.

Published in the Eleven Media newspaper Eleven Daily and on Than Htut Aung’s personal Facebook page, the editorial alleged that the chief minister, who is a member of the ruling National League for Democracy (NLD), accepted a Philippe Patek watch worth 100,000 dollars from a businessman who was recently released from prison and who has been awarded a Rangoon region construction contract.

After refusing to respond to a police summons on November 10, Than Htut Aung and Wai Phyo were arrested the next day and are now being held in Insein prison pending an appearance before a Rangoon court scheduled for Friday.

“The Telecommunications Law criminalizes media offences and, as such, constitutes a disproportionate response in a defamation case,” said Benjamin Ismaïl, the head of RSF’s Asia-Pacific desk.

“The Rangoon region’s chief minister has every right to defend himself against these allegations but it is completely unacceptable for journalists to be detained for several weeks because of what they publish, just as it is very pernicious for them to be threatened with jail sentences. This case is just reinforcing the already widespread self-censorship.”

Representatives of journalists’ associations and a network of lawyers specialized in media issues issue a joint statement on November 13 calling on the Press Council to play its role as mediator in this case.

“Rather than obsessing about the issue of journalistic ethics, the authorities should first create a favourable climate for freedom of expression and information,” Ismaïl added. “We call for the immediate repeal of this repressive law, which is a hangover from the previous regime and has no place in today’s Burma. We also call for the Press Council’s mediating role to be reinforced in this kind of case.”