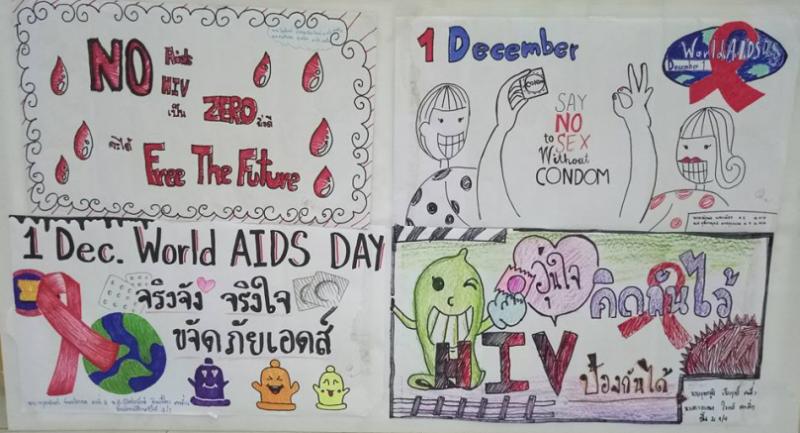 SHE HAS been living with HIV since birth. Today, at the age of 26, “Bee” (not her real name )has a job, many understanding colleagues and a boyfriend who embraces her for who she is.

“I can live a perfectly normal life,” Bee said. She asked to be referred to by a pseudonym to protect her privacy.

As a worker for the Thai Red Cross Society, Bee advises people living with HIV to not give up hope and continue taking drugs regularly so the dangerous virus can be suppressed.

She says she is happy with the job as it allows her to help other HIV-positive people and save money to support her family.

“It’s my turn to take care of the people who raised me – my aunt and my maternal grandma,” she said.

Bee is also happily in love. She mustered the courage to tell the love of her life that she has been living with HIV, and fortunately he has taken this in his stride, which in turn has strengthened their trust and understanding.

“I don’t have to hide anything from him. Had I not told him, I would have felt guilty,” she said.

The other day, Bee visited a family that was on the verge of crumbling after a husband learned that he and his baby were infected with HIV by his wife, who knew for years that she was infected.

“I visited the family and tried to explain that if they take their medication properly, their lives will continue as normal,” she said. “I am living proof.”

She says that even before she joined Thai Red Cross Society, she was determined to beat the odds.

“I used to be an assistant cook. I used to be a clerk,” she said. “Some of my HIV-positive friends have even agreed to work as security guards. We don’t give up. We only grow stronger.”

Bee puts her optimism down to the knowledge she received from camps and training provided to HIV-positive children.

“Now I’m serving as a social worker, visiting families in Bangkok and beyond,” she said.

Somchart Takaeng, the manager of Wednesday Friends Club under the Thai Red Cross Aids Research Centre, said his club was set up in 1989 to adjust the attitudes of people living with HIV.

“We talk to them and help them understand that they have no need to blame themselves. We try to relieve their worries and make them understand that we are by their side. We give them the phone numbers of people they can contact. It is only when they start opening up, that we start recommending treatments,” he said.

His club holds discussions on the last Wednesday of every month.

“But of course, those interested can call and talk to us at any time,” he said.

He said most of the people joining his club were men who have sex with men (MSM) as well as migrant workers from Myanmar, Laos, Cambodia and Pakistan.

“We can give them advice on where to receive medication and if necessary, we can provide the medicine too,” he added.

PrEP stands for Pre-Exposure Phophylaxis, a medication that can cut HIV-infection risk by 92 per cent if people take it for at least two consecutive weeks before being exposed to HIV.

At present, Thailand has recorded fewer than 7,000 new HIV infections each year. Of them, half are MSM, 20 to 30 per cent are heterosexual couples, about 10 per cent are people who inject drugs, while the rest are sex workers.

“In my opinion, PrEP is a cost-effective approach to HIV,” Prapan said.

“PrEP pills cost just Bt500 a month, but anti-retroviral drugs cost twice as much,” he said.

According to Prapan, PrEP was available in all hospitals under the jurisdiction of the Public Health Ministry, but those who were not HIV-positive had to purchase the drug themselves.

Somchart added that the Thai Red Cross Society was helping HIV-positive people find jobs, and insisted that all infections were kept confidential.

This is the last article in a series on HIV/Aids that The Nation has published to mark World Aids Day, which falls on December 1.